A friend of mine and fellow ‘watcher,’ Chris O’Brien, just sent me her essay on watching a great grey owl.  Most of her essay involved the thrill of actually watching a great grey in the wild, but she also did a great job of describing the owl’s mass of feathers.  Chris explained our ‘largest owl’ really isn’t our largest.  I know that doesn’t make sense.  Bear with me.  With Chris’s permission, I’m going to paraphrase some of what Chris wrote about great grey owls:

Great grey owls are magnificent. They're dimensionally the largest owls in North America, but they're mostly feathers. The first great grey owl I ever handled was killed by a car. The owl's body was huge, but lighter than it appeared. I poked my fingers into its head feathers, they sank the length of my forefinger before they reached bone. Picture its nine-inch-across head: three inches of feathers, three inches of skull, and three more inches of feathers. Wow!

The largest common owl in the United States is the great horned owl, which can take prey up to the size of a several-pound skunk, rabbit or cat; the diet of the “larger but smaller” great grey is primarily ounce-sized voles and other small mammals. Having handled both, I can attest that great horned owl feet and talons are much, much more powerful than those of great greys. Here are average dimensions (variation is due to sexual dimorphism; as in most birds of prey, females are larger than males).
Length  -   Wingspan -  Weight -        Weight


Great Horned Owl    18”-24”      39”-43”          32-88 oz        910-2500 g”
Reading Chris’s description of all those feathers heaped upon great grey owl’s body reminded me of an illustrating challenge I faced years ago.  I was illustrating “Birds of Prey of Wisconsin” for my mother, Frances Hamerstrom.  She wanted to draw the relative size of a barred owl’s body in relationship to the actual size of the barred owl.  The barred owl is another really fluffy owl.

My immediate response was, “But how?  I can’t create this out of my imagination.” – No problem.  My mother promised to send me a dead barred owl, another victim of our highways.  She would airmail me a frozen owl packed with dry ice.  It would stay nice and fresh for the trip.

But fate in the form on a late spring blizzard intervened.  The owl didn’t arrive and didn’t arrive.  The mail wasn’t moving on schedule.  I stayed home at least two extra days waiting and then needed to make a grocery run.  I asked the nice marine living next door would he please be sure and watch for the mailman and sign for the package?

Of course he would.

Still no package.  That evening I was just sitting down to dinner when the phone rang. “This is the Post Office.  You have a package here that you really need to pick up – RIGHT NOW!  It smells!   We’ll stay open until you get here.”

I went tearing out the door only to find my marine neighbor laughing himself to tears.  He’d muffled his voice and mimicked the post office.  …. But, still no package.

Fortunately my long-delayed owl arrived the next day and the dry ice had done its job.

But I wasn’t quite out of the woods yet.  At the time our twins were around two years old and a bit of a handful when I wanted to sit down and ‘do art.’  For once I hired a baby sitter for the afternoon and took the owl out of the freezer early in the morning.  By late morning I realized my darn owl wasn’t thawing.  The feathers were insulating it.   … and I had the baby sitter coming.

I had two choices.  Either roast my owl in the oven, or hang it in the sun on my cloths line.  The cloths line idea won.

So if you ever drive by my house and see something very odd on my cloths line, just remember there might be a good reason.

This is a continuation of my last blog, “Memories of Summer Past”.  Now, in the middle of winter, is a good time to revisit some of last summer’s memories when life is so busy that it is difficult to find time to blog.


We’ve returned to a landing on the Umpqua River – such a nice place on hot summer days.  I thought today I’d spend more time watching sand wasps and beewolves, but I find myself sitting on a rock watching a lizard.  I’m working on my lizard patience.  I’m trying to sprinkle myself with “Paulson’s Patented Patience Powder”—a term coined by a good friend of ours who admires Dale’s and my willingness to just sit and watch.  So much of what we see happens when we just wait.

Usually I just spook lizards and poof!, away they go.  Today luck is with me. I move ever so slowly to get closer. It’s a fence lizard, about 6” long.  Young. He moves off, but settles nearby on a boulder and is kind enough to poop – a black oval pellet, rather like rat poop, but with a white nodule attached.  Ah ha!  I’ve been seeing poop like that and wondered what makes it.  Mystery solved.  Now to find out why part of it is white.
The lizard moves to another boulder and waits.  Patience.
An ant makes the mistake of crawling up his boulder.  Lizard waits.  I wait.  Finally the lizard grabs the ant without moving an inch.  Just a quick lunge and the ant disappears.

Just waiting and watching is getting a little boring, but soon I spot a second fence lizard.  This one is only about 4 inches long.  At this young age its head is oversized.  #2 lizard is not quite as wary.  It lets me ease down on a boulder close enough for sketching.  This lizard is much busier than #1.  It seems to fly from one cobblestone to another, grabbing prey so tiny I can only wonder what it has caught.
This lizard sits and waits too, but never for very long.  Off it goes to get another tiny, tiny tid bit.  A big black fly lands nearby.  Yum!  The lizard leaps to a nearer cobblestone and then eases closer.  Oops!  Missed.  Off goes the fly.
Forty minutes have passed (1:05 PM) and #1 has only slightly modified his position.  #2 has changed boulders a dozen times and caught several tiny items. 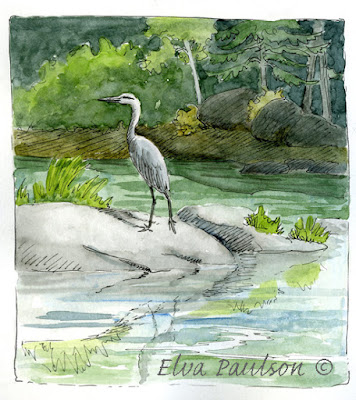 Sitting beside the Umpqua is peaceful.  We’re having our first really cloudy day of fall – probably just a temporary reprieve from summer’s hot sun.  Two noisy kingfishers chased by a few minutes ago, ospreys have taken a swing by and turkey vultures are often in sight.  I heard a great blue heron squawk when I first came down to the river.  My only complaint is my boulder gets harder and harder, and a yellowjacket seems determined to land on my hand.  I keep blowing it off.
Twice more my little lizard has tried for the fly.  Once he got within half an inch.  Now, for the past ten minutes, he is working on his patience.  That makes three of us – both lizards sit and wait and I do too.  The black fly buzzes about landing here and there.  Will he make a fatal mistake?
The fly is 6 inches from #2.  The lizard knows it.  Head up, the lizard is frozen in place ... and away goes the fly.  Safe for a fourth time.
Did I just move too quickly? Or is my little lizard ready to hunt actively?  The little lizard runs off in the direction of #1, about 8 feet away.  He inspects one cobblestone after another ... and then gets too close to the bigger lizard.  #1 flies off his rock chasing #2.  Both end up farther away from me.
I decide my hour of lizard watching has been well worth it, but it is time for me to move on too. 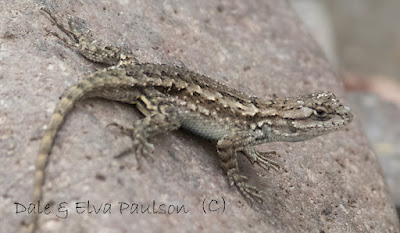 Note: According to Jonathan Hall, ‘wannabe herpetologist’, the white part of lizard poop is the lizard’s pee.  Squamates ( Squamatea = a snake, lizard, or worm lizard)  are very good at conserving water. What would be urine in mammals is concentrated into a chalky chunk of mostly uric acid referred to as urates.  Birds have this too, but theirs is runny and paste-like.