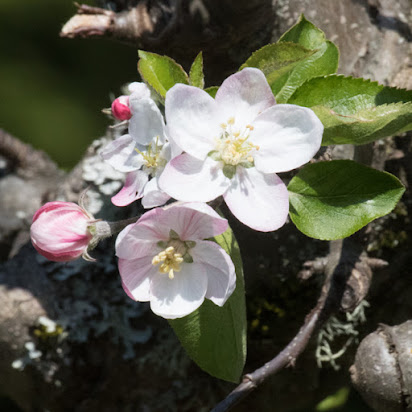 The sun shines, its breezy, and a little cool. As I wander from one old apple tree to another I hear individual orchestras humming and buzzing.  Maple trees are also singing.  Honey bees are out in full force and seem extra active to keep up with the coolness of the day.

Down by the pond Dale finds one lone damselfly and click beetle visiting an English daisy, but mostly it is pretty quite down here too.

I see a little brown blob clinging to a section of dead, floating sedge – maybe a snail. When I was a little girl I had great success raising snails and I have a hankering to try it again.  Wet, squishy earth immediately soaks my knees as I kneel, grab a twig and pull the sedge towards me.   Dale has a conniption fit thinking I’m going to roll right into the pond.  I’ve already put my camera and pack down, so I’m willing to live dangerously.

But it isn’t a snail.  It’s a tiny, bedraggled beetle hanging on for dear life!  Lucky for him this silly lady in tennis shoes came along; and lucky for me my pack has a small plastic bowl in which to temporarily corral him. 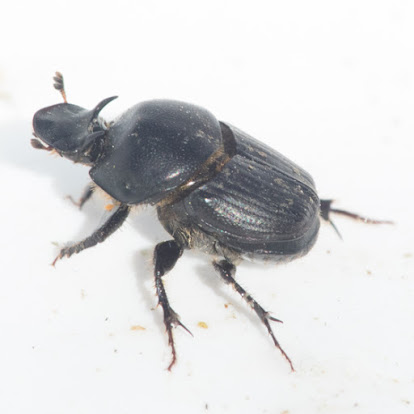 It looks like a dung beetle, but not quite like one I’ve ever seen before.  It has horns and a humped back.  The little guy is smaller than the end of my little finger.  He settles into his temporary corral and sets to work cleaning and drying himself.  With my eyes I can’t see much, but I’ve got a close-up lens on my camera so I can enjoy watching his toilette while Dale and I both photograph.

The ends of each arms has a delicate ‘tarsus,’  so tiny compared to the rest of his front leg.  He wipes and wipes.  Once done with his head … 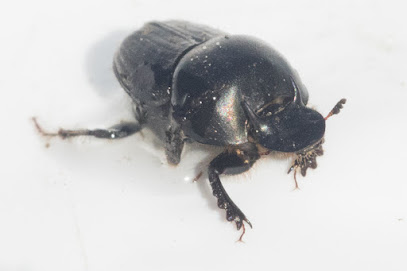 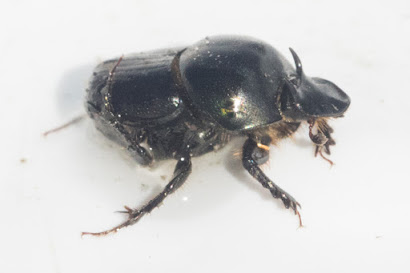 … and finally his hind legs wipe down his tail end.

Beetles technically have two sets of wings:  The hard out covering is the elytra – the first set of wings.  Underneath lies folded a pair on thin, transparent wings.  The magic underneath the elytra never ceases to amaze me.  I’m hoping this little guy is cold enough and slow enough for me to actually see that second pair of wings …. But, Pop!  Just like popcorn.  He pops those wings open and off he goes, flying off to new places.  I’m left wishing he had stayed longer although I had a good fifteen minutes. 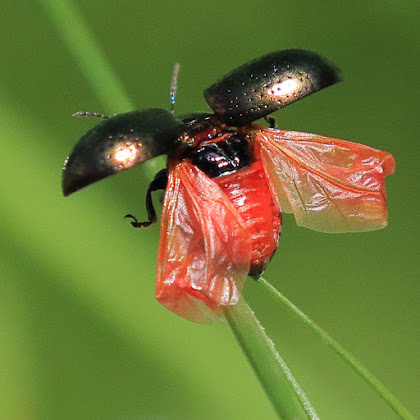 This is a different kind of beetle, but Dale did catch this beetle just before launch.  See how the wings are unfolding.

Once we got home it took a couple of days to figure out just what kind of beetle I found – a bull-headed dung beetle, Onthophagus taurus.  …and once in a while I stumble upon some gems of information.  His ‘horns’ can vary considerably.  Some have horns that would make a Watusi bull proud.  He is prepared to do battle with other dung beetles in tunnels of dung.  Most important, this little beetle has been written up in Sciencemag.org as nearly strongest animal on earth for its size!  He can pull 1141 times his own weight!   That is equivalent to a man lifting two fully loaded 18 wheeler trucks.  To come up with this amazing statistic, someone tied a thread to a beetle’s back, pulled it through a pully and added a little bucket.  Drops of water where added to the bucket to see just how much the beetle could pull.  The beetle must have been given a rough surface to cling to.  I think about this and I imagine the beetle dangling from his thread and the bucket of droplets sitting on the ground.

If that indignity isn’t enough, it was a tiny mite that has been found to be even stronger.