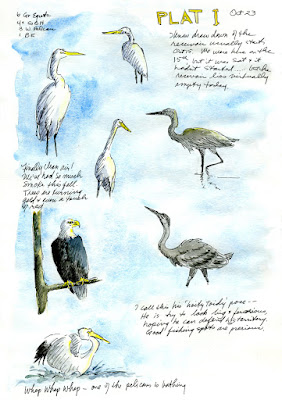 I didn't coin the phrase, 'Paulson's Patented Patience Powder!'  Our good friend, Joseph Conrad, coined it several years ago.  Joe is a retired physical chemistry professor we met in Yellowstone.  Someone suggested ‘that couple with Oregon plates on their van’ could help him identify a plant.  We clicked and over several years spent quite a bit of time with Joe.  After hanging out with us and seeing how long we sit and patiently watch, Joe coined the term PPPP — Paulson’s Patented Patience Powder.  He figured we sprinkle ourselves with PPPP on a regular basis.    Joe used to sleep in and often snuggled in his van reading things like the "Iliad" — in Yellowstone.  No more.  When he gets to Yellowstone, he can’t wait to get out in the park, pull out his PPPP. Over the years several people, including Joe, have thanked us for opening their eyes to the value of just waiting and watching.

After a disappointing summer of either too hot or too smoky we finally are getting some rain,  clean air, and a few sunny days.  Time to go out and dose ourselves with PPPP.

We head out to a little reservoir near us.  It is kept full all summer for recreation, but, on or about Oct 15, the Sutherlin Water Master draws it down to mostly a mud flat with a small stream meandering through.  When we get heavy rains, the reservoir fills instead of flooding the little town of Sutherlin downriver from the reservoir.  Then the water master lets the water out gradually and waits for the next heavy rain.  We look forward to drawdown because for a month or so fish are concentrated and bring in shorebirds, great blue herons, egrets, and even a few migrating white pelicans.  The last two years haven’t had nearly as many fish because our local fish hatchery burned in the 2020 wildfire, ending the stocking of fish; but the reservoir is still somewhat of a magnet.

We park on the dam, where we can get close to the water, and liberally dose ourselves with PPPP.  It is so nice sitting here.  Trees are turning gold; a few fluffs of white clouds float over distant hills; water almost a mirror.  Not a lot of ducks, but we do have a flock of Canada geese, a few herons, egrets, and half a dozen coot inspect the mud flats. We even have three white pelicans resting near the water edge.   On the other side of the reservoir, a mature bald eagle perches high in the cluster of snags.

Nearby an immature great blue heron catches a fish .... a stab into the water, a quick gulp and down the hatch.  Two fishermen arrive.  The heron catches two more fish; the fishermen don't.  A kingfisher comes and hovers over the water below us ... but only for a moment.  His luck isn't any good either.  The pelicans have left the mud shoreline and are bathing.  Whop!  Whop!  It surprises me I can hear their heavy wings beating the water from so far away.

A little more PPPP is in order. 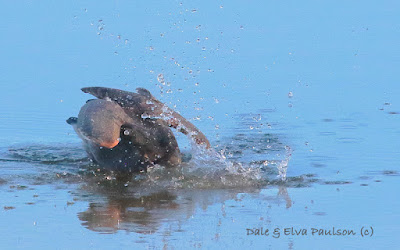 The fishermen give up, but our young heron is still hungry.  He grabs a fourth fish, a rather large bullhead which poses a problem. 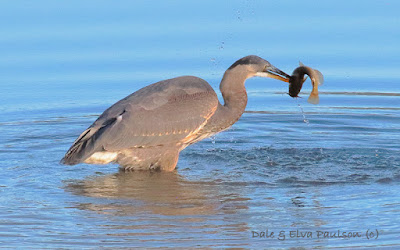 He turns and carries his fish to where the water is only about an inch deep; drops the fish and stabs three times.  He picks his fish up, but it is full of wiggle. 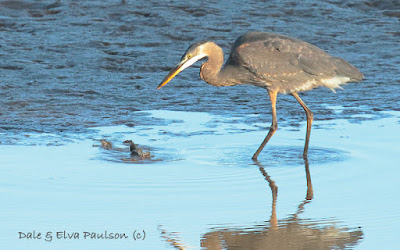 This heron now holds his fish still for a moment.  Wiggle! Drat!  He drops it again and the fish does it's best to escape in the mud and very shallow water.  Easy to catch.   The heron stabs again and again.  The fish is starting to lose its wiggle. 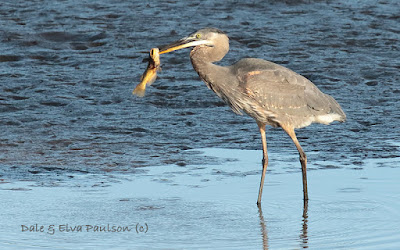 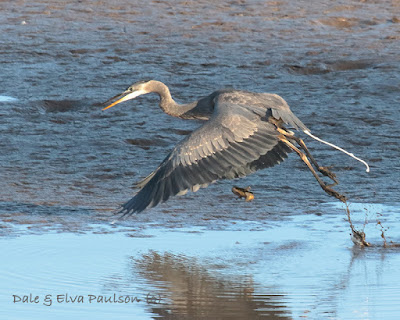 ‘Whoosh’!  Down comes the mature bald eagle and literally scares the crap out of the heron.  Look carefully and you can see the lone string of white poop and the bullhead is in midair. 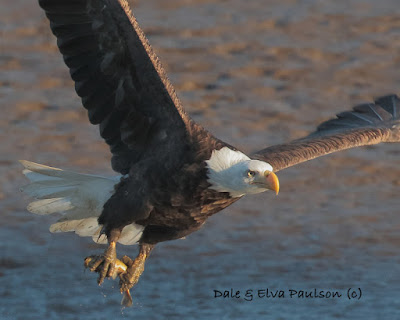 In one neat swoop, the eagle snags the muddy bullhead and flies back to the far-off snag where he had been perched.  Note the eagle's muddy feet.

Slightly ruffled, the great blue heron lands nearby.  Soon he is trying for another dinner. 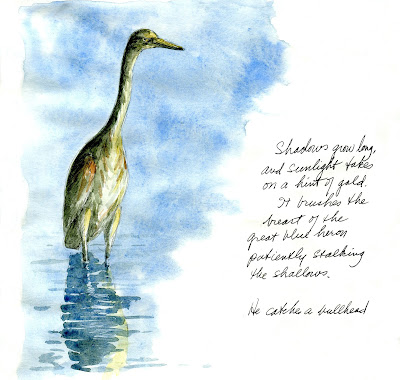 And so ends a good day!