Half a Fish is Better Than None: Part II 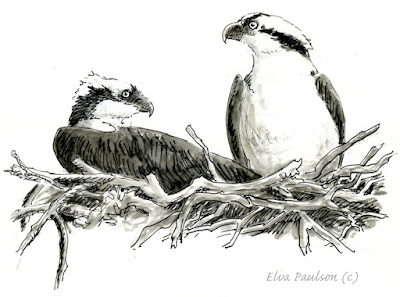 April 15:  We are back sitting at the edge of the peach orchard.  Both on the nest when we arrived.  This is our fourth day in a row.  When we arrive the hen is at the nest and the male is perched in the far off snag.  Not for long.  He drops down and grabs soft organic matter, a gob in each foot – grasses?  But he is a clumsy fellow and drops one foot-full when he goes back to his snag.  Oops!  Guess he meant to come to the nest with it.  He soon arrives and drops off the part he still has. 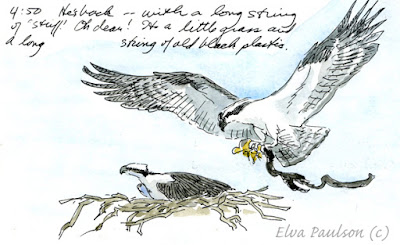 I think this guy is a bit of a doofus.  He heads out again and comes back with a great fistful of stuff – including a long string of black plastic.  I’ve already noticed some black plastic tucked between sticks in that nest.  A little re-arranging of sticks is in order too. …. And off he goes. 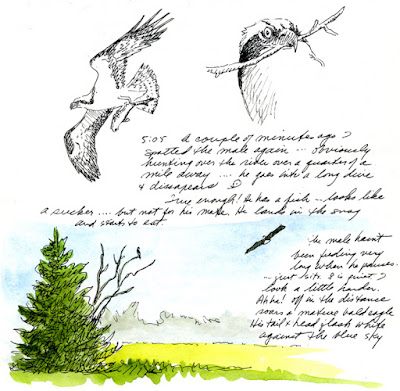 I see him far across the nearby field, hunting over the river.  He dips behind the trees and soon returns with  a fish.  This one looks like a sucker.   He takes the fish to the snag and starts to feed …. Pauses.  Why.  The female has been begging, but quiets.

I look a little harder.  Ah Ha!  Off in the distance soars a mature bald eagle.  He tail and head flash white against the blue sky.  Both osprey keep an eye on the eagle until it disappears. The male goes back to feeding until it’s time to bring half a fish to his hen.  Is he eating the best part (the brains), or is he doing her a favor by bringing her the meat sans guts and head??

April 21:  Incubation has started!  This time when he brought her half a fish, he settled onto the nest while she flew off to eat it on her telephone pole.

About the time ‘my’ osprey started incubating, a friend sent me a link for a live cam on an osprey nest near Independence, Oregon.  I get a full screen, live view of the Ollie and Olga right at their nest!  ….

Here comes Olga to resume incubation duties.  Note how she balls her feet when snuggling up to her mate – very careful not to injure the eggs.

May 15.  Dark clouds cover the Willamette River and the Independence osprey nest.  I believe it is Olga on the nest.  She grabs shreds of what appears to be bark and tucks them carefully around her.  I’m impressed how alert she is.  Always on the lookout.  At night I see she seems to sleep soundly, but during the day the bird on the nest has always been alert when I’ve watched the cam. 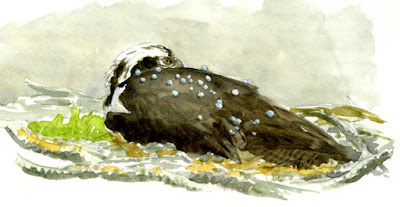 The clouds darken and soon raindrops are pilling on the osprey’s back. 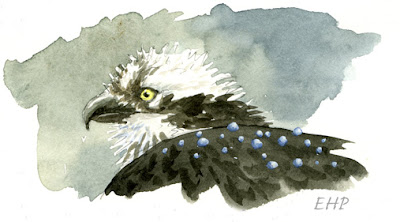 She shakes her head frequently, tossing the raindrops off.  Such a treat to up such an up-close view of a totally relaxed bird.

On a sad note, this nest failed close to the time when the eggs should have hatched.  Ollie disappeared.  Something must have happened to him.  Olga is dependent on his help.  Commentors on the live cam feel there is a good chance Olga will be nesting there again next year as she has for several years.  I look forward to watching little osprey grow up.