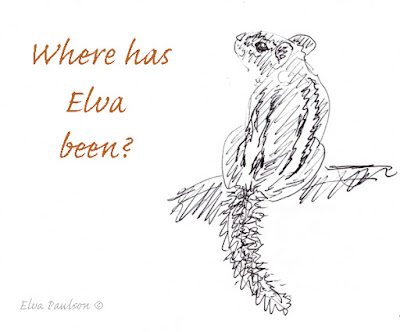 We've been traveling.  Before I left home I had a strong resolution to keep posting a blog regularily .... but I didn't.  I'll blame it on the weather.  The weather was too darn nice and so day after day Dale and I got up as early as we could drag ourselves out of bed, and all too often ended up eating supper at 9 or even 10 PM. 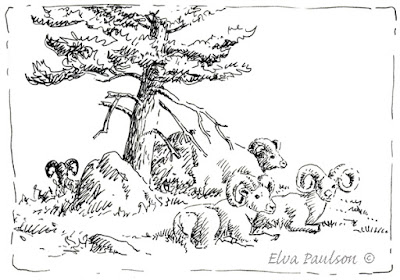 Mostly we've been in Yellowstone National Park -- one of my favorite haunts.  We spend nights in the little town of Gardiner, Montana, and days in the park.  Virtually every day we get up early and eat a 'lap' breakfast once we get into the park:  peanut butter on toast, hard boiled egg, a little cold sausage, banana and coffee.  You'd think I'd get tired of the same breakfast, but it is nice not having to think in the early morning.  Lunch comes out of the cooler and has more variety -- sometimes sandwiches, sometimes sardines, sometimes cheese and sausage. I cook a hot supper back at the little cabin we stay in. 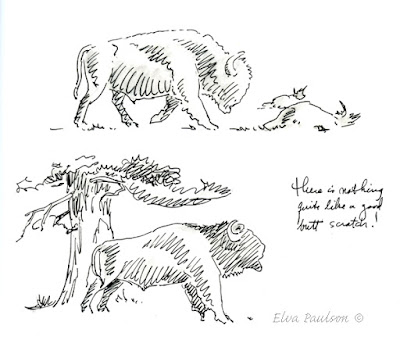 We seldom have a plan, unless something caught our attention the day before and there is a reason to go back to the same location the next day.  Many of the park's visitors have a special interest:  they want to see wolves, or geyers, or the whole park in three days.  We putz along and look for bugs, birds, flowers, and, of course, all the big mammals.  Bison calves were born while we were there ... always fun to watch.  This year we saw pied-billed grebes dance for the first time, and had several days watching baby ravens growing up.  This post just features a few of the sketches I drew while on this trip.

This aspen was scarred years ago when a bear cub climbed the tree.  Its sharp claws left permanent marks. 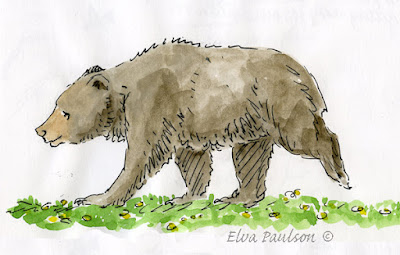 Usually I either draw from my photos on my laptop, or many of my drawings are field sketches done on location.  This last one, the grizzly, is just done from memory -- but what a memory.  Dale and I had had lunch, napped in the car, and were just sitting hoping some little bird would come along.  Suddenly I whispered to Dale, "Look!  LOOK!!"  A grizzly was walking past.  My window was rolled down and we didn't even have a key in the ignition so I could roll it up.  Fortunately the grizzly just strolled past.  Later we measured the distance -- 60 feet. 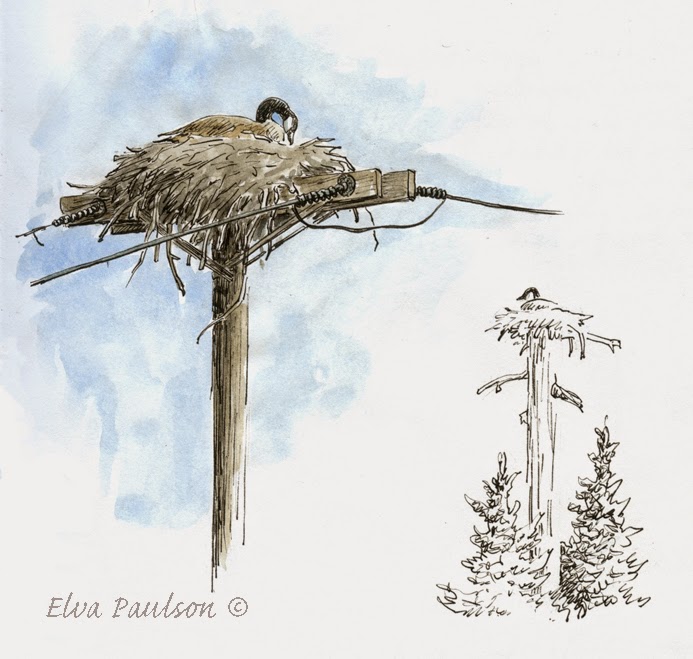 Each year I intend to write something specifically for Mother's Day.  This year I finally did.  Don't worry, it won't be about apple pie and lullabies. My mother wasn't that kind of mother.  Come to think of it, I do have a good story about her pies, but first let me tell you about that silly goose sitting up there on the telephone pole.  The goose is what got me to thinking about 'Fran.'  So I'll switch to Fran right now (prodounced 'Fron' -- like any good Bostonion would pronounce it).

Fran was quite outspoken about the pronunciation of her name.  I was gathering family stories and telephoned two of her sister-in-laws in short order.  Both volunteered basically the same story.  Fran had just been picked up, I presume at a train station. As she settled into the car, she turned to her brother's new wife, Dotty, and said, "We'll get along much better if you remember to call me 'Fron.' A few days later I'm talking to Liz, the wife of my father's brother, and she also told me how Fran immediately laid down the law on the proper pronunciation of her name  ... so 'Fron' it is.

It was 'Fron' for me too.  Once, just once, as a teenager I dared to call her "Mom."  Wham! She tripped me.  Down I went, mostly in jest.  The ground was soft and she knew it -- but I remembered well not to try that again.  My father was 'Hammy,' but I could sneak in a "Pop" once in awhile too. 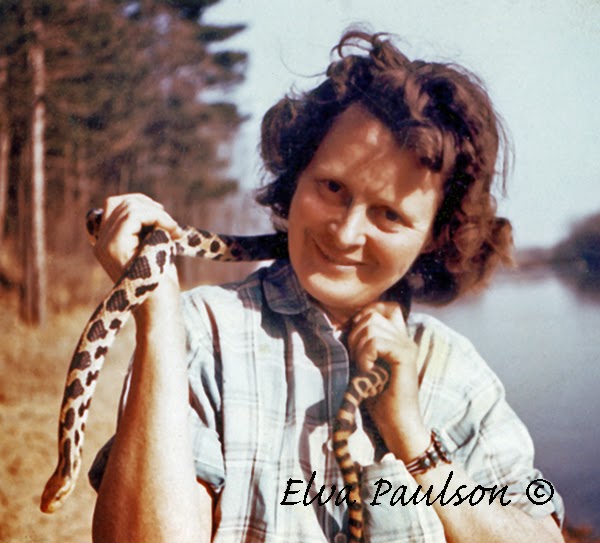 Back to the goose.  My mother was a wonderful naturalist and had a great curiosity.  If I'm looking under rocks, and pondering on the browse line in my back yard, it has a lot to do with her influence.  My father knew a great deal about nature too, probably more, but more of his came out of the books and scientific journals lining their study wall.  It always amazed me how he could pull a Latin name for a plant out of his head or know the exact range of a particular mouse.  Nature discussions with 'Hammy' were serious and in depth.

It wasn't often I got to show my mother something in nature that surprised her -- but the goose did.  She was visiting us in Oregon and there, fifty feet or more above the ground was a Canada goose that had taken over an osprey nest for her own.  I still marvel when I see a goose nesting up there in the sky, but they do, and they seem to do just fine.  A friend sat for three days watching one of these high rise nests because he knew they were about to hatch.  Once the goslings are dry, the goose family needs to move on right away.  Geese don't feed their goslings; they take the babies to the food.  So these little guys have to jump to the ground within a day or two of hatching.  I've watched video of wood duck ducklings taking the flying leap.  It's a little like tossing cotton-balls overboard.  Fortunately the babies have a lot of down and their bones are soft.  Usually they bounce a little upon hitting the ground.

Fran looked up at that goose nest high over her head, on top of a broken off Douglas Fir, and said, "Well I'll be damned! and then she was speechless for a moment -- rare.

As for pie, Fran made excellent pie, especially apple pie and mince pie..  She never made just one pie.  She'd make three or four and usually wanted at least one empty pie crust for the next chocolate pie or lemon meringue.  Unfortunately the empty shell was usually stored, uncovered on top of the cereal boxes on a high cabinet in the kitchen. All too often we shared the house with a great horned owl and that high perch was a favorite.  Owls don't eat piecrust, but they do nibble on it to see what it is, they walk on it, and occasionally poop on it.  Owl poop is rather chalky and easily brushed off.  Need I say more?

Fran's legendary pies came in handy when she needed a series of hawk biopsies to test for DDT.  Her study area was in Wisconsin.  She was studying how vole populations affected harrier (marsh hawk) populations and then became suspicious that DDT was decimating her harriers. The DDT test was very expensive, buts someone volunteered to trade --  a pie for each test.  As I remember the lab was in California.  How to air mail a pie to California and have it arrive in one piece?

Fran would slip the pie into a nylon stocking and tie the ends of the stocking to the sides of the box.  The theory was the pie rode safely inside as if it was hanging in a hammock that always wanted to right itself, and safe from jarring.  The box was big, but fairly light.  Off it went airmail. I've always wished I could have talked to the guy in California.

Should you happen to want to read more about my unusual parents I put together a collection of stories written by friends and family, "Hamerstrom Stories" -- available at Amazon.com.  Or you could read some of the books written by my mother, Frances Hamerstrom.  My Favorites are "An Eagle to the Sky" and "My Double Life."
Posted by Elva Paulson at 9:41 AM 3 comments: