Back to the Coast 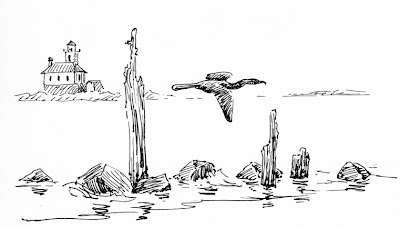 We’ve been back to the Oregon Coast twice since we saw thousands of sooty shearwaters on Sept 12.  Lots of shearwaters still being seen along the north coast, but not where we go on the central coast.  Ah well, treats like that don’t come along every day.

Meanwhile a trip to the Coast never fails to be enjoyable.  September 12 was sunny, cool and a brisk breeze blew most of the day.  The fifteenth was a much mellower day:  first cloudy, then sunny for about an hour and then early fog rolled in completely erasing what I was drawing.  We picked up fish and chips and drove inland about five miles to the Dean Creek Elk Refuge. 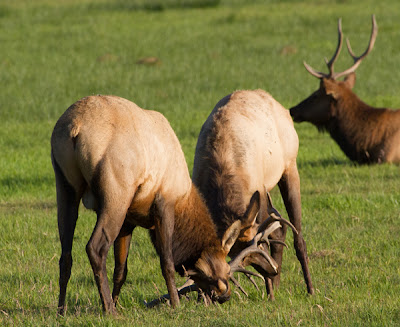 Here are my elk notes:

I just had fish and chips from Ungers with 14 bull elk and Dale.  We are obviously looking at the ‘wanna-be’ club, i.e. the bulls that haven’t been able to gather a harem.  As we ate we watched several half-hearted sparring matches, some grazing, some resting, and one bull did a through job of urinating on his long neck hairs before heading off in the direction of another bull’s harem.  Why do cow elk find stinky bulls attractive?

After eating, we drive on down the valley to park on the roadside and watch a bull tending his harem.  This is a handsome fellow.  His dark rack with light tips is the biggest of the racks we’ve seen this evening.  Both the bull and his cows look sleek and athletic.  His has about 20 cows bunched in a meadow. 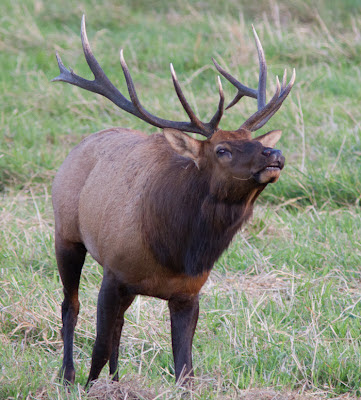 He was slightly off to the side when we parked, but soon lowers his neck, tips back his antlers and flehmulates (flehmening = a deer or elk peeling back his upper lip and sniffing the air to see if a female is in estrus).  The bull picks up speed and enters his herd of cows.

Lots of sniffing, but none of the cows seem ready.

This end of the valley has long been darkened by shadows.  In the distance sunlight is just leaving the last bit of meadow.  Night will soon take over.  Time for us to head home.

September 19
Mellow, grey day on the Oregon Coast.  The weatherman promised a sunny afternoon, but he was just pulling our leg.  Still, it’s very pleasant.  No wind.  Even though visibility is decent a foghorn blows long, low blasts.

While we eat lunch (fish and chips again), one immature gull waits patiently.  As soon as I feed him a couple of French fries, his companions fly over. 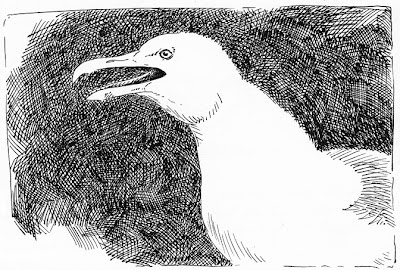 This adult called and strutted and tried to convince the others that all handouts should be his.  All his posturing doesn’t keep me from tossing fries to everyone.

When we run out of food for the gulls, all but two fly back to their central-waiting-area, a good spot from which they can watch for any humans with food.  The two gulls near us plop down on their bellies and digest.
(end of journal notes)

I was lucky.  I gulped my food down -- yummy -- and started drawing.  Our friend Eleanor ate slowly and Dale fell asleep after his fish and chips.  I drew all three sketches before Eleanor and Dale were ready to move on.  .... Well, I did finish the crosshatching later. 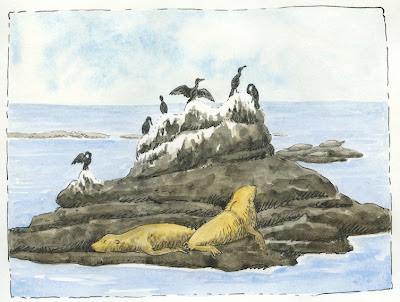 I knew something amazing would come along and that I would just have to find time to start blogging again.  Whether I can keep it up remains to be seen.

After watching hundred of sea lions at Simpson Reef for a couple of hours Dale and I drove about half a mile farther south along the Oregon Coast, to a point where we hoped to see a whale or perhaps an interesting bird or two.  At first glance it looked all too quiet --  very scattered gulls and a vast expanse of Pacific Ocean.  I knew the stiff breeze blowing from the North would make it extremely difficult to spot a whale’s spout.  The white puff of steam would be whipped sideways and disappear amongst all the whitecaps. 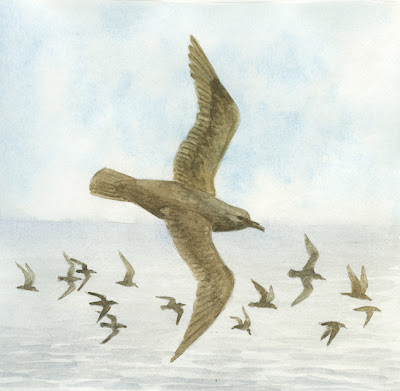 Then, with binoculars, I picked up one of the awesome sights of nature -- At first I thought I saw hundred of birds, then I realized it was literally thousands of birds heading North into the stiff north breeze.  They reminded me of a long thin band of large swallows tipping and turning and constantly flowing North. I could see enough to tell they were basically a very dark brown.  No distinctive markings.  I wondered if they were some kind of petrel.

We watched for about ten minutes, went to a nearby shelter spot to eat our lunch and returned for another look.  The birds were still streaming North.

Once I got home I unsuccessfully tried to figure out the puzzle for myself.  Then I turned to OBOL, Oregon Birds Online.  Lars Norgren soon answered my call for help, “I'm sure those were Sooty Shearwaters, the most abundant bird in Oregon, sometimes a million are off our shore at this season.”  He went on to say they nest in New Zealand and Tasmania, then move in a figure eight across the Pacific.

Now that I know the birds are sooty shearwaters I started reading.  Another population of sooty shearwaters travel the Atlantic Ocean.  One place says radio chips show the Pacific birds travel up to 18,000 miles in a year, another site says nearly 40,000 miles!  So far they travel more miles than any other birds that have carried radio chips.  The shearwaters can also dive 225 feet, but often feed on the surface.  They eat squid and small fish.

Japanese call the shearwaters ‘bakatori -- Japanese for crazy bird.   The Maori in New Zealand call them ‘mutton-birds,” so named for their oils, fats and food.  The young are harvested just before they fledge.

Since our sighting on Sept 12 we’ve been reading about other reports of huge flocks farther north along the Oregon Coast.  One night a raft of 10,000 or more rested in the fog near Newport, Oregon and over 40,000 were reported near the mouth of the Columbia River.  Most recently an estimate of 200-250 thousand were seen from Boiler Bay.  It is hard to imagine numbers like that.  I hope to see them again.