Mother’s Day is creeping up on me again.  I saved a little clipping last year that I happened to stumble upon on the internet.  My intension was to blog about it last year, but Mother’s Day slipped by.  Today I can’t find the website, but no matter.  I saved it on my computer.  I love the little clipping.  It may be far from accurate, but it does capture the essence of my mother, Fran (Frances Hamerstrom).

Here is the little article.  I jotted down a note that it came from ‘The Backcountry Chronicler’.  When I first found it, I tried to figure out who wrote it, but I couldn’t find that either.

Note About Fran Hamerstrom – I had the good fortune of meeting Fran on several occasions. The first time I met her was in 1983 at an eagle breeding facility. I was able to witness her reunion with the eagle “Chrys” after a separation of at least 10 years. They obviously recognized each other.
The last time I saw her was at the 1992 National Falconry Meet in Lamar, Colorado. It was about 10°F and she was standing in the snow wearing sandals at age 82. My friends were amazed, but I knew that she still “skinny dipped” in the pond at her Wisconsin home as long as she could break the ice with an ax.
She broke her hip on a trip to the Amazon jungle at age 87 and died in 1998 at the age of 90. They don’t make ’em like that any more.

Fran did have a golden eagle named Chrys, and she had the rare good fortune to share a nest with Chrys.  Chrys had been rescued as a young chick and raised by someone else.  Chrys came to Fran as an adult.  In early spring Fran realized Chrys was ‘nesty’.  An attempt was made to artificially inseminate Chrys.  The attempt was successful in that Fran and Chrys built a nest in our big farm shed (Fran handed sticks to Chrys and Chrys placed them), Chrys laid her clutch, and promptly began to incubate.  In the wild. an eagle’s mate would have shared incubating duties …. So that fell to Fran.  Every day Fran plopped a hot water bottle on the nest and spent time doing nest duty while Chrys ate, bathed, and got a little exercise.  The eggs never hatched, but Chrys was given foster chicks, I believe red-tailed hawks, and was a doting parent.  At that point Fran’s job was easier.  She supplied Chrys with fresh road kill and let the eagle do the feeding.

Eventually Chrys was moved to Cornell and, during a different spring, artificial insemination was successful! Fran took pride in that she helped develop the technique.

I can well imagine Fran and Chrys recognized each other after a long separation.

And Fran did break her hip on a trip to the Amazon jungle.  She liked to be a little vague that she was in town when it happened.  She slipped on the mud of the Amazon River in Iquitos, Peru.  She didn’t even telephone me for help for over a week.  Finally it sunk in that she wasn’t going to get a hip replacement in Peru.  My brother, Alan, flew to Peru and brought her to me, in Oregon, with the broken hip.  I still wince when I think about seeing the X-ray.  By the time she got her new hip almost a month had passed.  She was tough!

But taking an axe down to the pond for a swim is a little much!  She might have done it once, and I will admit her regular method of bathing during milder weather was a quick dip in their pond; but Fran didn’t like a good chill.  She liked to say she had ‘lizard blood.’  She loved to get warm and thoroughly enjoyed going to hot places after my father died.  He was a good Scandinavian and preferred cooler climates. 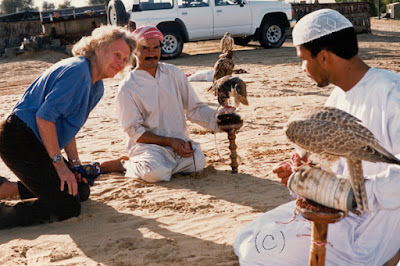 Here is a photo from another hot place Fran traveled to after my father’s death.  One of her ‘Gaboons’ (students) ended up as a shiek’s falconer in Dubai, United Arab Emirdates.  Here she is enjoying the shiek’s falcons.