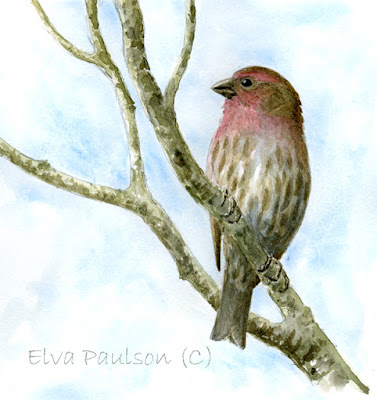 I was going to call this blog “Frozen Bird,” but I didn’t want you to think I was blogging about  dead bird.  It’s about being ‘frozen,’ i. e. very, very still.

Have you seen a bird frozen still?  It is different from just resting and being still.  There is a relaxed posture when resting.  ‘Frozen’ happens when the bird is hoping, hoping something isn’t going to see it.  Often when I spot a bird on a nest it freezes.  “I’m not here.  I’m just part of this lumpy scenery.”  Many female birds have dull colors so they can blend all that much better.

I’ve been watching a ‘frozen’ bird on a twig near my feeder.  I was eating my morning bowl of hot steel cut oats, blueberries picked last summer, walnuts and yogurt.  I look out onto my feeder area.  --- Very quiet.

Then I noticed one bird, a frozen house finch.  I checked the time; 9:03 AM (lazy start to my morning!).  I finished breakfast:  9:10 AM; and started doing little chores.  I continued to keep an eye on my bird.  By then Dale had pointed out there were actually two in the bush, two frozen birds. 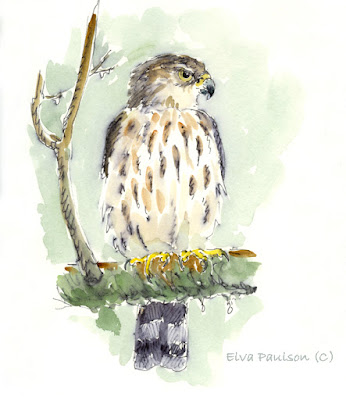 By now I’m sure there is a hawk in the area -- probably a sharp-shinned hawk, possibly a Cooper’s hawk.  They can become a real pest at a feeder.  One year I watched a sharpie grab and pluck a pine siskin – a little bird that weights about as much as a puff of air.  It took him 20 minutes to plunk and eat.  I was sketching by then so I was watching carefully.  When finished, the sharpie popped down into the bushes where another siskin must have been frozen.  More dinner for the hawk and more sketching for me.

And then the sharpie dropped down and grabbed a third siskin!  Obviously staying frozen doesn’t always work.  It didn’t fool this hawk.  The hawk flew off with the third bird.

But my best watching-a-frozen-bird sighting had a happier ending.  I was washing dishes and watching some juncos on my deck.  Suddenly one froze; hanging onto an almost vertical broom handle leaning on the deck railing.  I couldn’t see the hawk, but I was sure one was perched over the house.  The junco was in an awkward position and I happened to look at the clock -- twenty minutes!  Finally he relaxed and flew off.

This morning’s watching had a happy ending too.  I don’t know how long the finches had been frozen when I first noticed one.  But it was 13 minutes before a couple of new birds arrived and started bouncing around in the bush.  The two I’d been watching relaxed and soon were amongst the flock of birds foraging on the cracked corn we throw out for them.

By the way, ‘chick scratch’ is excellent food for many of the ground feeders.  Chick starter is too fine; hen scratch is too coarse for sparrows.  Chick scratch is like coarse corn meal.
Posted by Elva Paulson at 3:37 PM 4 comments:

Winter in western Oregon is pretty mild compared to where I grew up – Wisconsin.  I lived in a drafty pre-Civil War farmhouse which was heated with wood stoves.  If we wanted to leave the house overnight during the winter, all things that shouldn’t be frozen were stored in a small closet with a light on for warmth.

When it got colder than 20 degrees below zero we quit pumping water for fear the pump would freeze.  I should clarify the pump was one of those old iron pumps with a long handle.  It was an awful chore to unfreeze the pump.  When it was really cold my mother was known to dump a shovel-full of snow on the wood floors and sweep like mad.  She likeed how much cleaner the floor got with her ‘sweeping compound.’  Of course the main rooms were reasonably warm, but the floors had no insulation.

Oregon is an odd state in that the coast and the western valleys have hardly, if any snow each winter; but up at Crater Lake average snowfall is almost 44 feet!  The Cascade Mountains have some of the best skiing in the nation.

But my little Anna’s hummingbird may think western Oregon winters are plenty cold.  We finally got a few days of snow just after the new year started.  I was out at first light, ready to hang his hummingbird feeder.  The hummer was busy buzzing about in my hawthorn, trying to find a branch that wasn’t drenched in snow!  It does look odd, doesn’t it, i.e. a hummingbird surrounded by snow.  Soon the arriving chickadees and juncos shook much of the snow free and he could perch and fluff up between his forays to the feeder.  Fortunately the snow only lasted a couple of days. 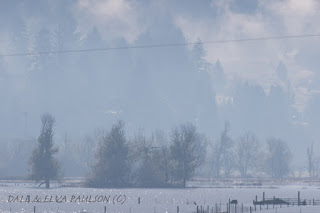 Winter in western Oregon also brings rain, lots of rain.  This year we are getting even more than usual.  This big ‘winter lake’ is about 40 miles west of where I live.  Most of the year this huge lake is a lovely green valley dotted with fat cows.  Fortunately the ranchers know that their land will probably spend part of the winter underwater.  Their homes are above high water and they make sure they have high land for their livestock.  The floodwaters bring valuable nutrients to the land and so their pastureland remains rich. 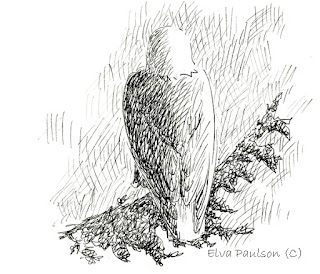 As soon as temperatures drop farther to the north, hundreds of ducks and geese come to rest and feed on the flooded pasturelands.  The water is shallow and just underneath lush grass awaits them.  Nearly every time we drive by this winter lake we spot at least one pair of bald eagles.  Winter is a rich feeding time for them too.

Another sign winter in my life is a good dose of whale watching.  During late December and early January about 18,000 gray whales swim south along Oregon’s coast heading Baja, Mexico where they birth.  Often the whales are hard to spot.  Either they are swimming too far from the coast or the sea is rough and full of whitecaps.  Last Saturday was the perfect day;  clear skies and a low swell gently rolling towards shore.  We parked to eat lunch and watch, hoping to see a whale to two.  I immediately spotted four spouts, and then two more . . . and more.  We’ve never had such good whale watching.  Over the span of an hour we saw at least twenty whales.  Most were in groups of two, three, and sometimes four.  Usually a group swims along the surface spouting frequently, then, one after another, they dive and remain out of sight for a few minutes.  They’ll reappear a little farther south.  When I see the tails go up in the air, I know they are diving deep and it is time to look for another group.  I just wish they swam closer to shore.  Often all I can see was their white puff of air exhaling.  Sometimes I see their backs for a moment or two.  The best is their big tail, rising up and slipping into the water. 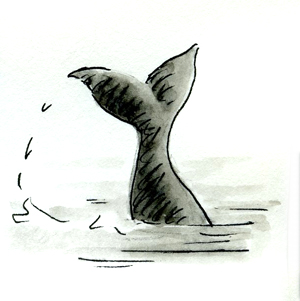