The last two weeks of April in Yellowstone feel more like late winter than spring.   Gradually the snow pack melts and ponds have more and more water around their edges.  Several species of birds arrived early:  many species of ducks, sandhill cranes, robins, mountain bluebirds, Townsend’s solitaires. Other birds are just arriving in late April:  ruby-crowned kinglets, swallows, more ducks, and a few hardy shorebirds.  Many of the spring birds will wait another month:  western tanagers, most of the warblers, flycatchers.

By most people’s standards we arrive too early.  But we like the solitude that comes with our early arrival and is all too elusive later on.  Plus watching spring unfold is a treat.  Both Dale and I grew up in Wisconsin.  I may not miss all those months of winter, but I do appreciate a nice taste of winter when we first arrive in Yellowstone. 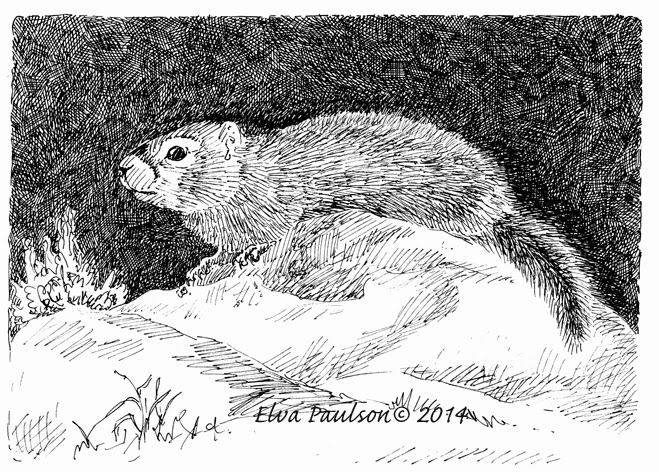 I always feel as though the first marmot I spot is the first one out of hibernation, but in my heart I know they’ve been poking their heads out on nice days before we arrive.  Our first sighting was on April 16.  Two marmots were sitting on a tumble of rocks just west of Blacktail Loop Rd.  I caught the near one grooming and he froze -- “Maybe she didn’t see me.” I’m of the philosophy that many critters relax more quickly if it is obvious I am in a mellow mood …. So I sing. I’ve got a tin ear, but the marmots don’t seem to mind. They peered down at me from their rocky abode and pretty soon were looking happy again.  So far the marmots have avoided getting their toes in the snow, so they must just pop out of the rocks for a look-about.  As soon as there is a little grass along the roadside, they’ll be scurrying for safety when we drive by. 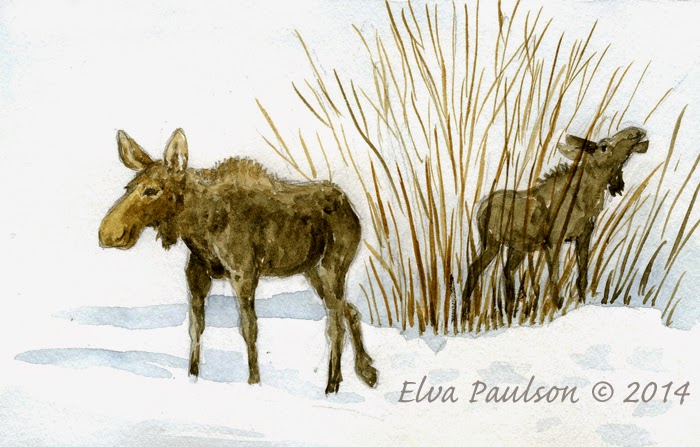 Another treat that same day is the moose gods were kind to us.  The marshy willow patch just above Phantom Lake has been harboring a cow moose and two calves.  We wonder if the smaller is a yearling and the larger possibly a two year old.  The size difference could just be the difference between their sexes.  The boy calf is much larger.

I spotted one as we drove by.  We turned around and found a place to park.  Soon I saw the second, and then Mama came out of the woods.  The three browsed on clumps of willow that are scattered though out the marsh.  The moose never browsed one willow for very long.  They wandered from one to another, sometimes getting quite close to us.  I could dear twigs crunching as they chewed  and could even hear quiet talking between them.  They sort of mumble to each other.

Sometimes the crust held the moose and sometimes they broke through.  They crunched and munched for at least an hour.  Finally Mama and the girl calf lay down and the boy calf kept on grazing.

First an apology .... I know my font is jumping around in size ... but my attempts to fix it have failed.  Rather than retype the whole post I'm going to leave it as is.

When we first arrive in Yellowstone, it takes a little while to settle onto ‘Yellowstone Time,’  i.e. focusing on where we are and soaking in Yellowstone’s special brand of wildness.  Some people feel park animals are tame.  We feel this is a rare place where animals haven’t learned to fear man and respond to man as if man had never taken over their continent.  Here we can be reasonably close to natural behaviors and feel our presence isn’t an intrusion as long as we remember there still are limits as to what is appropriate behavior for us.

Our first days are spent checking out favorite haunts.  There really isn’t a lot to check at this time of year.  Only the road through the northern section of the park is open.  It runs from Mammoth to Cooke City and is kept open except during inclement weather … and government shutdowns.  The only place to stay in the park in early April is one half of one campground.  All park lodging is closed.  We stay just outside the park. 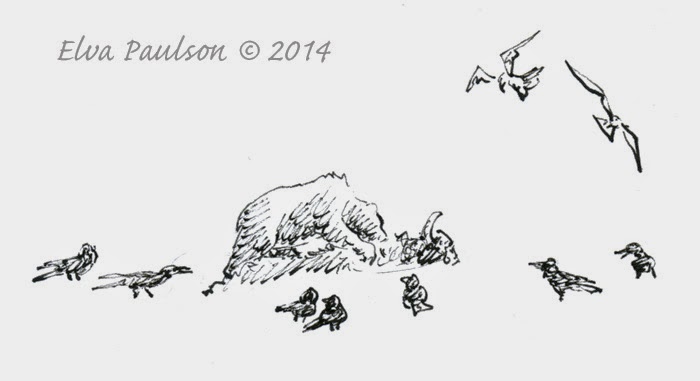 A good friend, Bill Hamblin, pointed out our first bear for the season.  Far off on Buffalo Plateau a grizzly was feeding on a winter killed bison carcass.

Blacktail Ponds still has punky ice.  Not much in the valley for bison to eat, but bison shuffle about taking advantage of old grasses.

Floating Island is still frozen, but beginning to darken around its edges.

We ate a lunch at the entrance of Blacktail Loop Road.  Later on it will be a good place for birds, but very quiet this early in the season.  We parked for over an hour and didn’t hear one bird call.  Instead we watched snow sublimate, which is just a tad faster than watching grass grow. 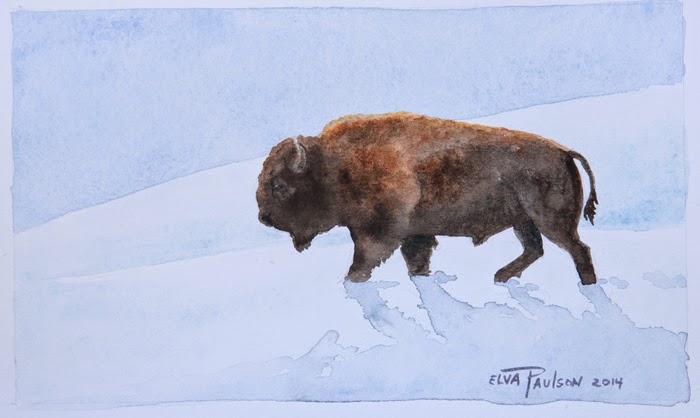 Little America has streams and ponds we’ve never seen before.  Lots of water flowing. It has been warm the past few days and there is lots of snow to melt.  Yellowstone got 150% of its normal snowfall this past winter.  There are bison in Little American, but all we saw in the Lamar Valley was just a few scattered bison bulls.  The stillness of winter lingers in the Lamar Valley.  Deep snow on all but the southern exposures.  Honking from a pair of Canada geese briefly interrupted the quiet.  Two old bison bulls plucked at frosty, dry grasses.  One raven.  Much to come, but not here yet.

We went all the way to Cook City on the 14th., saw all the snow, and turned around. In the higher elevations we looked for both moose and bear tracks, but found only deep, unblemished snow. Soda Butte Creek is beautiful.  Pillows of snow cap boulders and clusters of icicles hang just over the creek.  They form when water splashes up and drips off low hanging fallen logs.

On April 14th we were surprised to find lots and lots of leafhoppers down near the creek at Lava Creek, in the tall, dead grasses.  They seem an odd find in this chilly weather.  We checked a few days later and they seemed to be doing just fine in spite of nights well below freezing.

Elk numbers are way down from their high.  National Public Radio says there are about 3900 versus 20,000 in 1992.  Wolf numbers have also dropped way down from their peak.  An overabundance of elk made for abundant wolf numbers.  Now the pendulum swings, maybe too far the other way.  It’ll take time to find the new normal.

We both have a strong sense that we have had the good fortune to spend a significant amount of springtime in YNP when it was one of the choicest of times.  We started spring trips about the time of the wolf introduction.   We had far better wolf viewing then than what occurs now.  The good part is we are now seeing some recovery of the habitat … aspen and willow are making  progress.  More pronghorns and more foxes.  Even beaver numbers are recovering in the park.