Maybe you’ve noticed I haven’t been posing lately.  The good news is that I’ve been traveling.  I had good intensions of posting at least something every couple of weeks, but just couldn’t find the time.  There never seemed to be enough hours in the day to even get enough sleep.

We spent about six weeks in Yellowstone National Park, and then another handful of days in the Malheur Basin, Oregon, USA.  I have lots of notes, sketches and photographs.  Now to find the time to translate some of them into a digital format. 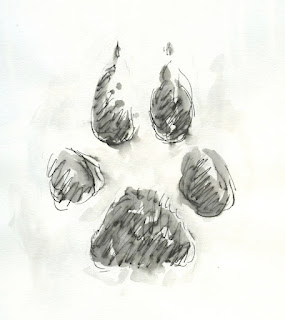 Hard freeze last night.  Crusted snow crunches loud under my feet.  Chilly wind.  We’re following a wolf track on a closed road.  The wolf came through yesterday when the snow was mushy.  Its prints sunk deep.  Now the tracks are frozen solid.  Dale starts to photograph the track and I’m just grabbing my pencil when he looks up and realizes two bison bulls are following the same path.  Prudence is in order.  We back off the trail at least 50 yards into a rumble of rocks.  The bison lumber along.  Fortunately they don’t linger.  They are heading to an opening farther down the road. 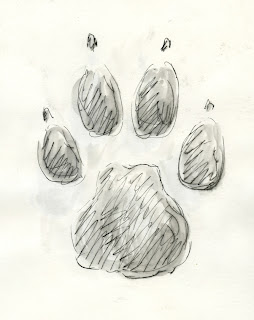 As they pass I worry the bison are smashing the wolf tracks.  No.  Enough tracks survived.  I get to draw and Dale photographs.  I soon realize the left front paw is abnormal.  The toes should point forward, but on the left foot they splay out.  I lay my pencil down next to the track so I can measure its size.  Big.
Farther up the trail a smaller wolf has passed this morning.  It left shallow tracks in the dusting of snow that fell on the crust.  While I sketch the far off bugle of a pair of sandhill cranes reaches us.

Lucky Me! A Kingfisher Tale 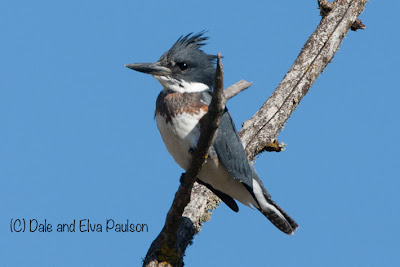 Sometimes long, long stretches of patience pays off and we get an unusual photograph ... and sometimes luck just jumps in and things happen so fast I have to pinch myself to be sure I wasn’t just dreaming.

Dale and I were slowly driving along when I spotted a kingfisher sitting in a tree next to the road.  Kingfishers always seem to perch just a tad too far away or flush as soon as we get near.  Rule #1 when photographing wildlife is to ‘give it a try.’  Dale slowed down and I eased my camera up on the bird.

I had just time enough to fire off a couple of shots and check my exposure when suddenly the kingfisher’s mouth opened. 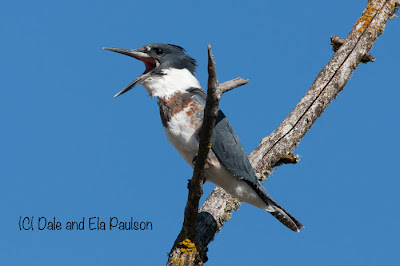 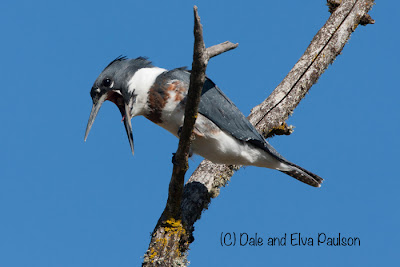 and wider, but no sound. 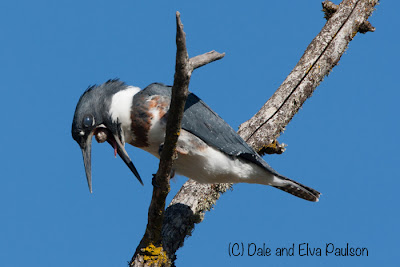 Suddenly I realized I was watcing the kingfisher cough up a pellet ... just like owls do! 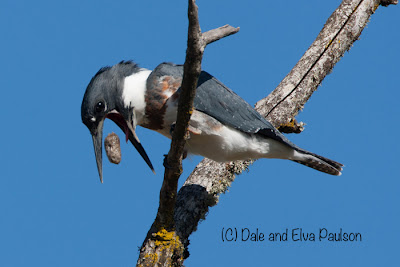 I’ve since learned a quite a few birds, that swallow whole prey items, cough up pellets.  In addition to owls, hawks do, and crows, herons, and kingfishers.      Probably several more species of birds do too.