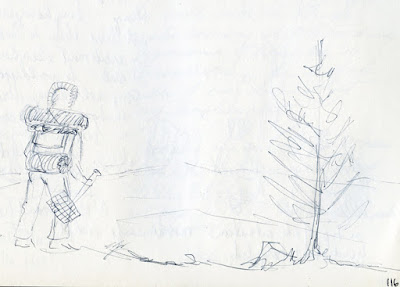 June 1977
Here is one from my first journal.  The sketch isn't much to brag about, but I'm immediately transported back to my solo night on the top of Pine Ridge near Prineville, Oregon.  I'd always wanted to spend a night alone in the 'woods.'  The spot I picked wasn't woods, but rather the wind swept top of a ridge in the high desert of eastern Oregon.  It wasn't a long hike in, maybe an hour of slow, steep climbing.  Once on top I found a snug spot somewhat sheltered from the wind by boulders, and next to a gnarly ponderosa pine.  Supper that night was a steak grilled over a little fire (see the hand held grill I'm carrying), raw carrots and bread.  Probably an apple too.  I remember the carrot, but not the apple.   I look at the sketch and I know immediately I was wearing the knit hat my parents brought back from Europe.

The high desert is chilly at night, but I knew that. The one heavy thing I brought was a good sleeping bag.  No tent.  During the night a great horned owl flew into the tree above me and hooted.  What more could I ask for?

Early 1990s:  I already had the scan and didn't even go to my notes for an exact date.

I'm just over a slight rise in the Lamar Valley of Yellowstone.  Even though I'm relatively close to the road, I'm out of sight and feel as though I have the whole, wide-open valley to myself.  Just moments after dropping into my own little world, I realized I was not alone.  Mr. badger -- he was big, I do think it was a male -- was watching me from his pile of freshly dug dirt.

Badger turned and dug some more, great gobs of dirt flying into the wind.  Soon he turned to watch me again.  I hadn't moved.  He watched and watched and finally decided to nap a little while he half kept an eye on things -- my chance to sketch.  In my mind I still see the dirt on his nose and the wind ruffling his long hair. .... and the delicious feeling of being one with nature.

1997:  Yellowstone -- By now I was writing better notes.  These are only slight edited:

1:45 PM:  Arrived at sandhill crane nest just south of Twin Lakes. Some of last night’s snow still clings on the north side.  She sleeps lightly, frequently glancing about.  She watches warily as a bald eagle soars over.  Three Canada geese behind her crane their necks tracking the eagle.  The sandhill is pulling reeds into the nest.
2:05 PM:  She (?) stands and bugles several times.  Her mate has arrived.  Both bugle.  This small valley resonates with their calls.  The “arriver” reaches down with its long bill and gently rolls the pale, lightly mottled egg.  One egg:  large and shiny as if wet.
One crane passes nearby pieces of tule (bullrush) to the other;  the second crane tucks it into the nest.  Three or four pieces and that’s enough.  As the first crane walks off, it picks up and tosses more pieces of reed to the crane on the nest.  The new crane rolls the egg again and starts to settle down onto it.  Ouch!  That position isn't quite right.  He (?) stands again and attempts to turn.  He is standing on his own foot!  First it must untangle its toes, then settle down again.  With his back to us, he tries again, but that isn’t right either.  He (?) stands and pivots to the right and settles for a third time.  Better. 2:20 PM:  He preens on the nest.  Still one dab of snow unmelted on the nest.  More is falling, but it’s not sticking.
2:25 PM: Stands, then eases down and sits on his (?) elbows and looks around.  I think he is trying to find a solution to this lumpy problem.
2:30 PM:  Still sitting on his elbows.  He(?) is pumping, sort of deep breathing?
2:32 PM:  She just laid an egg!  Damn.  I missed the actual egg laying by a hair.  I was busy drawing her head.  I looked back to the crane and saw she was standing over two eggs. The new one is a little darker and perhaps has just a tad of blood on it.  Damn!  Damn!  Damn!  I should of, could of, seen that egg pop out, but of course I’d never get any drawing done if I watched every single moment.  And Dale was taking a break (napping) too.

Next day:
I’m still kicking myself for yesterday’s lapse in brain function.  My gray cells weren’t firing on all four cylinders.  Both Dale and I made a faulty assumption that the new crane on the nest was the male and it didn’t cross my mind to reconsider it .. and then I didn’t bother to wake Dale when the crane sat there on her lower legs evidencing unusual behavior. 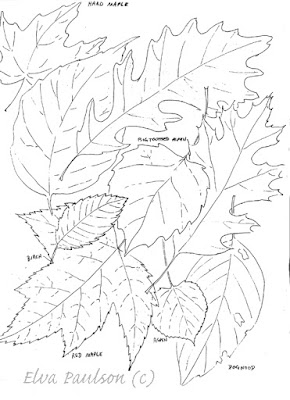 I look at these leaves woven together and remember how the ground at Itasca State Park was carpeted with leaves.  They were still dry and crackled when I walked on them.  Many still hung onto their fall colors.  I'd been living in the West and almost forgot how many deciduous trees grow in the Midwest. We camped there hoping to hear loons calling.  We did see one loon, but it didn't call.  It was the leaves that were memorable. 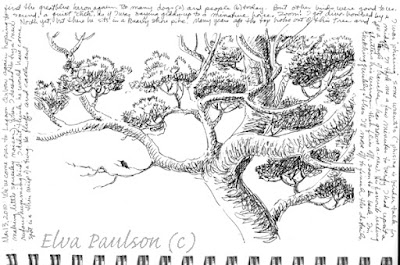 "Too many dogs (2) and people (6) today, but other birds were good to us.  I was phising some wrentits ('phising' is birder talk for making little squeaky noises).  When I decided to try a new sound, a quiet "click", as if I was saying giddyup to a miniature horse.  Zoom!  I got dive-bombed by a midget.  It took me a few minutes to verify I had upset a rufous humming bird.  I didn't think he would have come north yet, but there he sits in a gnarly shore pine.  Many years ago the top broke out of the tree and now a tangle of branches has grown a-new.  His favorite resting spot is a thin wisp of a twig.  He fluffs and calls, and flutters his wings; then flies off, soon to be back.  I'm sketching quickly and then I'll move off to finish the details. "

.... isn't that a wonderful tidbit to remember! 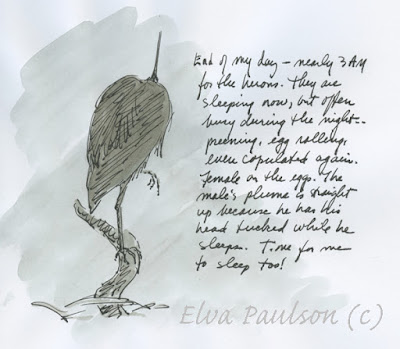 This little 'field sketch' is an odd one.  I was watching Cornell Lab's live web cam of a great blue heron nest.  Their camera was so good I sketched a series of the herons and their nest.  To me they still qualify as field sketches.  I may have been much cozier sketching in front of my computer, but it was still life happening in real time in front of my eyes.   I was closer to the nest than I ever could be in the wild.  I ended up writing two blog posts about the nest (see April 2012).

On my last sketch I wrote:  "End of my day -- nearly 3 AM for the herons.  They are sleeping now, but often busy during the night -- preening; egg rolling; even; copulated again.  Female on the eggs.  The male's plume is straight up because he has his head tucked while he sleeps.  Time for me to sleep too."