Back to the Pikas 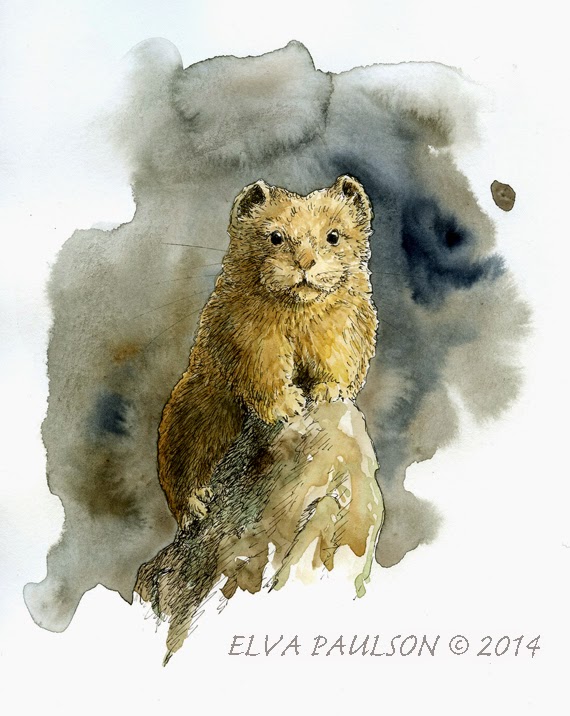 I got a wonderful response to my last post.  In addition to the comments box I also received several e-mails.  Thanks you.

And so now I shall continue on.  I can't help resisting posting another one on pikas, maybe because they are so much fun to draw!

We've dawn busted, i.e. we set the alarm for 5:15 AM and got going before the first glimpse of dawn.  It's been awhile since we've been out this early .. and all because of those little pika beasties.

Pikas like cool, so they usually scurry about early and late in the day.  The pika colony we know of on the slope of Crater Lake goes into shadow long before sunset, but should have morning light.  By leaving home early we should get to the pikas by 9 AM.  Up there in the high country it'll still be cool for most of the morning.  We're hoping we'll catch the pikas hard at work cutting and storing their winter food supply.  We're heading back to the same spot where we spotted the badger (see my blog post, "Where are the Pikas?", but we doubt the badger will still be there.

It's a beautiful fall morning when we arrive.  Blue sky, still chilly.  I soon hear a far off "wheeze" so I know pikas are awake.  I settle on a rock to wait and watch ... and wait and watch.  Sunlight pours onto the tumble of rocks where the pikas make their home.  I finally get one far off photograph, but barely recognizable as even a pika.

After an hour of rock sitting I decide this isn't a good spot.  All too soon it'll be too warm for pikas.  I head down the road and into a different jumble of rock.  Right away I spot a little guy zipping across the rocks with a long stem of greenery.  But he saw me too.  More wait and watch. 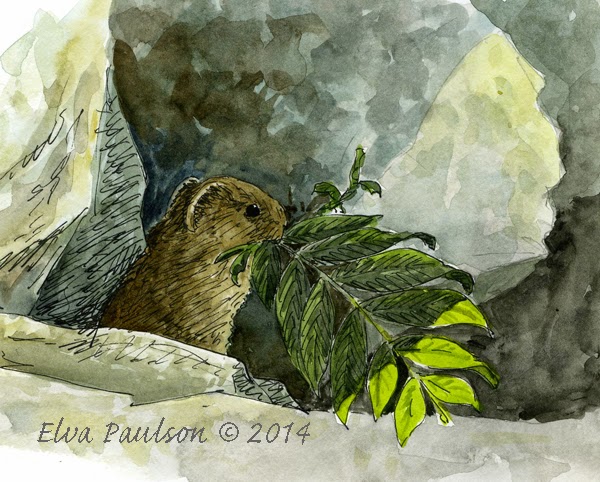 During the next hour I get one more sighting, a slightly better opportunity.  A pika grabs a big green frond and scurries up slope with, floating from one boulder to another.  He pauses in a shadow of a large rock half way up.  There he blends into the shadows, all but the tip of his frond which sparkles bright green in the sunshine.  All too soon is he out of sight.

Finally I accept that the coolness of the morning has worn off.  Time to head back to Dale.  He is interested in lunch, but first a small wasp catches my eye and soon both of us are trying for a photograph.  We've never seen one like this before.

A car pulls up behind ours where we are parked on the shoulder of the road.  Out comes a couple about thirty years old.  They are fascinated by the rocks, the cliffs, the jumble, the pumice soil.  The man climbs from one boulder to another and finally onto an eight foot tall boulder, all the while carrying on a loud conversation with his friend.  From up there he spots a furry creature just below. He hollers out, "What's this?  It looks like a cross between a mouse and marmot."  Our pika!

We were so patient and quiet ... and he is the one who gets close to the pika!  I'll shout, rock hop, and bumble my way about next time.

In all honesty there often is merit is not being too sneaky.  Just last week I tried to sneak from one lodgepole to another to get close to common mergansers resting on a log along the shore line of Diamond Lake.  They spooked.  Immediately afterwards a little brown creeper caught my eye and I concentrated on a family of creepers for the next twenty minutes.  Suddenly I realized the mergansers had returned to their log and I was way closer.  I 'd lost interest in the mergansers and so they chose to not worry about me.  Serendipity. 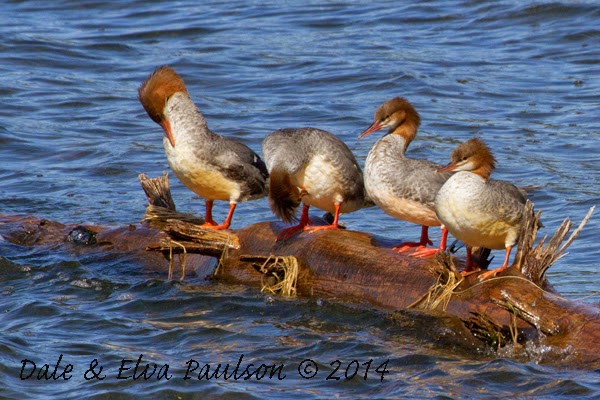 Where Have I Been?

Did you miss me?  It been six weeks since I posted.  I'll admit I've been sitting on the fence wondering if I should continue blogging.  Ienjoy sharing my peeks into nature with you and I like to think my writing skills are improving as I keep plugging away at it,  but sometimes I get a little frantic finding the time to do it.  .... so I had a little talk with myself.  If I'm too busy to blog, just don't worry about it.  That is one of the perks of job.  Its not chipped in stone that I must post ... and when I post it doesn't necessarily have to be right away.  I write my raw notes promptly, usually in the field; but I don't see that it matters if you hear about my badger, bugs and beasties this week, next week, or even next month.  I hope my posts are like a good nature book that you can pick up at any time; and that if you are new to my blog, you'll enjoy wandering through past posts when you have some free time.

For those who don't know:  I've been filling one journal after another for many, many years.  Oh gosh!  About 40 years!  Keeping notes is part of my very being.  On Feb 1, 2011 I posted a blog on "Thoughts on Keeping a Journal."  I see I was on volume 37 at the time.  Now I just finished Volume 43. So I have plenty of material to work from.  I just need the time to sort the quality out from the quantity.
While I haven't been posting I've been busy with several things.  I took the time to read four books; we went on two trips to the Klamath Basin (five days each); I've drawn a dozen interesting species for the South National Estuarine Reserve near Coos Bay, Oregon; and I've been waiting for the blogging bug to bite again.  Now that the rains have come to Oregon we are staying home a little more.  The blogging bug is nibbling at me.

You'll hear more from me soon .... probably.  In the meantime I'm including some of my recent art. 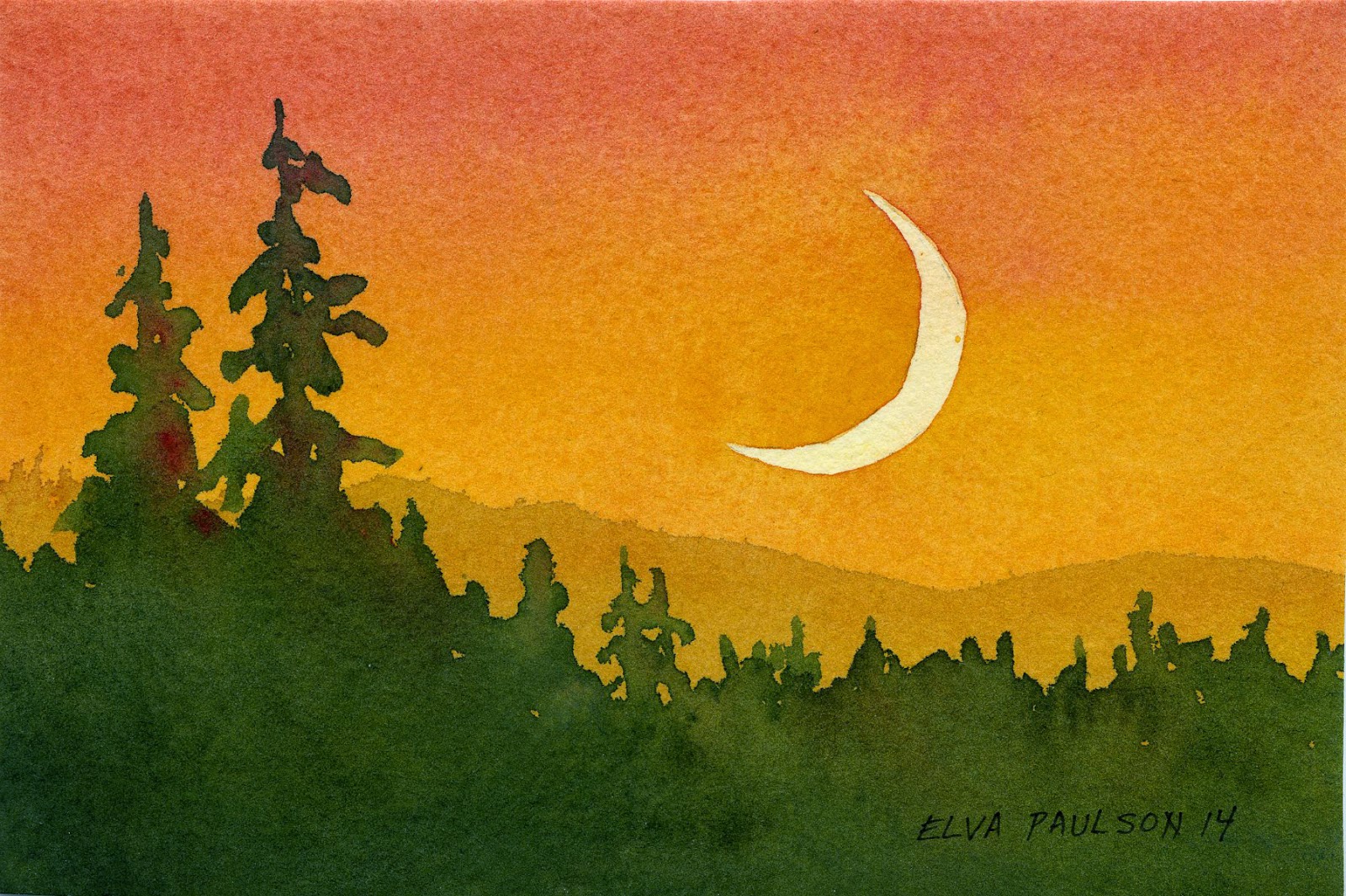