Sketching Along the Coquille River 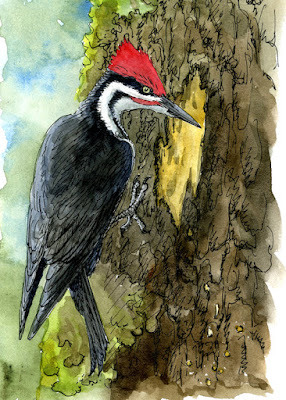 This will be a short blog ... a peek in my sketchbooks from a wonderful day along the Coquille River.  I’ll type the text basically as found in my journal, along with the art.  Only the first pileated woodpecker was drawn on location.  I juggled my sketchbook, binoculars, and camera in order to get him fairly well penciled.  Then I finished him at home.  That evening I sketched the rest of the drawings from the images we took that day. ..... such a nice day!


Beautiful, beautiful fall days this past week – freezing nights and clear skies.  But we’ve been stuck home while our new windows get put in.  Today is Saturday and we have more nice weather ahead of us.

Sturdivant Park, Coquille River, Coquille:  I walked to the river bank and thought I heard a pileated calling.  Found him on a small alder a little downriver ... just close enough I am sure it is a pileated!  Don’t see those often.  Always exciting.  I think there are two down there, but maybe the second is a Stellar’s jay.  Just too far away.

But then, with lots of calling, the pileated wings his way upriver and lands on a large alder across from me.  When the sun catches his red crest, it almost looks florescent. 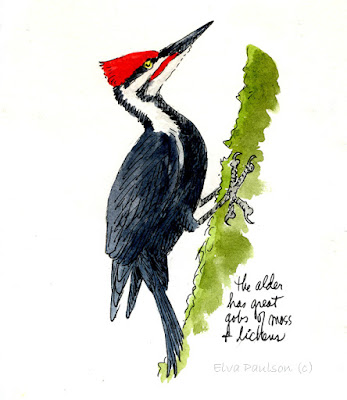 The pileated lands fairly low – just above the thick blackberry bushes lining the river.  He inspects here and there and then starts to pound.  Sunshine catches golden wood chips floating down.  When he moves to the far side of the tree, his hammering reassures me he is still there.  Three or four little birds (kinglets?  chickadees?) come over, perhaps hoping then can grab a morsel.

We watch for nearly an hour.  He is still hard at work on the same tree when we leave. 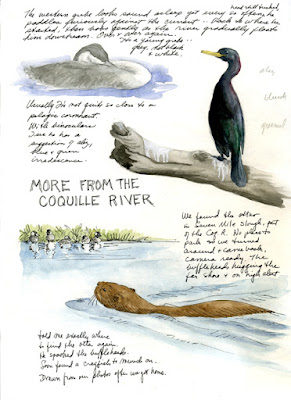 Coquille River, near the mouth of the river:  The western grebe looks sound asleep, yet every so often, head still tucked, he paddles furiously against the current – back to where he started, then bobs gently as the river gradually floats him downstream.  Over an over again.  It is a young grebe – grey, not black and white.

Usually I’m not quite so close to a pelagic cormorant.  With binoculars I see he has a suggestion of alizarin, blue, and green iridescence.

We found the otter in Seven Mile Slough, part of the Coquille River, near the coast.  No place to park, so we turned around and came back, camera ready.  The buffleheads hugging the far shore and on high alert told me exactly where to find the otter again.  He spooked the buffleheads.  Soon found a crayfish to munch on.