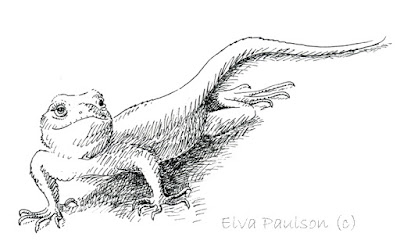 No, this isn’t going to be a blog post about finances, but most of you know who I’m talking about when I mention the “Oracle of Omaha’ – he is a rather private man, well known for his financial expertise.  When the Oracle of Omaha speaks, people pause and listen.

Recently I read a short blip about Warren Buffet .... that he reads a lot and makes time to pause and spend some time thinking each day.  Doing that goes hand in hand with his desire to learn something new each day.  Now that makes sense to me.

Earlier this spring I did a good job of following the Oracle’s advice.  I was doing my thinking while standing and dosing myself with a good dose of ‘Paulson’s Patented Patience Powder’ and watching a lizard on lizard time.  Lizard time involves a lot of waiting / time to think.

Dale found the western fence lizard basking in the somewhat tepid sunshine.  His spot of choice was a low, split rail fence that circles around a pole, keeping the unwary humans from accidently bumping into the pole:

The lizard is a dark fella, hugging the top rail of a two rail fence and sitting only about eighteen inches off the ground.  I’m reasonably sure this a male.  Wait.  Wait. Wait.

Suddenly he perks up.  There is a second lizard, just a little smaller and a little lighter.  The first takes offence to the presence of the second.  Suddenly lizard time warp speeds into a flash dance.  Off they go, zipping around the circle of spilt rails.  At the far end the little one cuts a corner by jumping off the rail and scurrying through short grass, then back up onto another rail.  I get the feeling this is a well traveled path.

At the far side of the circle of rails, the big lizard pauses.  He has done his job.  The little ones continues a few more feet and settles into basking on a lower rail.  I’m back on slow-mo lizard time.  But I’m still hoping to get a really good photograph of that big handsome fella.  These lizards are used to people walking past so I can stand reasonably close to them.  They ignore cars parking nearby and a toddler wandering by, but a motorcycle causes both to disappear until the cycle quiets.  Even a red-tailed hawk soaring overhead doesn’t bother them.

My back aches, a couple getting ready to go hiking must wonder why I’m standing there frozen, but I stick to waiting and watching.

Good!  Big Fella is returning to the rails near me.  He basks for while ... more lizard time.

Now I see what has brought about the change.  A much smaller lizard peeks over the side of the rail. It isn’t the one that got chased.  That one is sill basking.  This one is much smaller and has elicited a very different response than the first did. I wonder if it is a female. 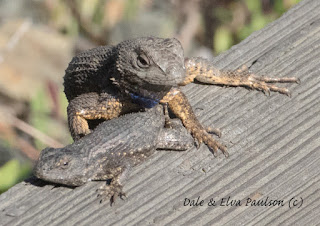 The little one seems comfortable in Big Fella’s presence.  She (?) holds still and allows him to half cover her.  Big Fella has a lot of blue on his throat.  – almost surely a male.  Am I seeing what I think I’m seeing?

After about 30 seconds the two part.  The little one disappears and Big Fella goes back to basking.

I sprinkle a little more patience powder.  The wait is well rewarded.  Big Fella perks up again and goes into ‘huff and puff mode’ -- suddenly he swells to nearly twice his size, he drops his dewlap of bright blue from under his usually flat throat, and does pushups! Obviously a male.   Mr. Macho.  The blue on his throat and sides is almost iridescent and set off by a bit of yellow. What a handsome dude.  I’ve seen the huff and puff mode before, but this is the first time I’ve gotten a good photo.

After we returned home I followed a little more of the Oracle’s advice – time to read up on some lizard information.  We need more fence lizards!  I found out fence lizards have a protein in their blood that kills Lyme disease.  If the tick sucks on a fence lizard it won’t kill the tick, but it will kill the disease if the tick is carrying it.