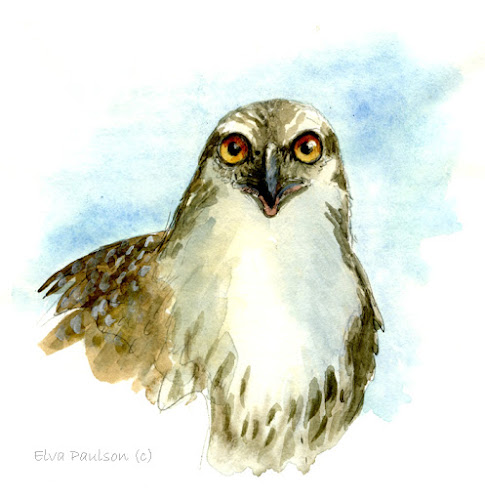 When I ended my last osprey blog, the remaining two youngsters were just beginning to flap hard enough to briefly lift off the nest.  That was July 22.   I can’t help but hold my breath when their nesting platform seems so small and so high up in the air.  I wonder if a miscalculation when they were practice flying resulted in the death of the one chick (see my last blog).

During the following ten days we hit a hot spell here and so we didn’t spend much time at the nest, but every time we checked, the remaining two chicks were on the nest and doing just fine.

Aug 2:  We arrive about 4 PM – two on the nest and one on a nearby pole.  Suddenly I realize one of the birds on the nest is an adult – and the bird on the telephone pole is a youngster.  They are really flying!  And to make matters even better, the second youngster, the male, flies over to the telephone pole to join the first.  He is a klutz.  He tries to land on some bulky hardware, rather than the cross arm – not a good perch for an osprey.  It a learning process. 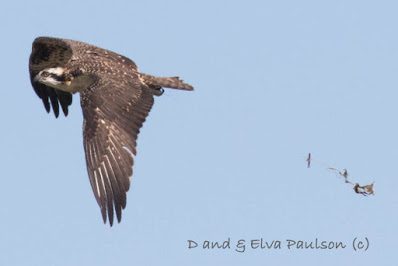 Oh no!  The female youngster takes off.  Behind her drags three feet of tangled fishline and junk.  She loops around and returns to the pole.  I walk closer for a better look.  This is a disaster waiting to happen.  She has a tangle of fish line, a small stick, and possibly fish skin dangling from her left foot.  She doesn’t like me so close and flies off again. 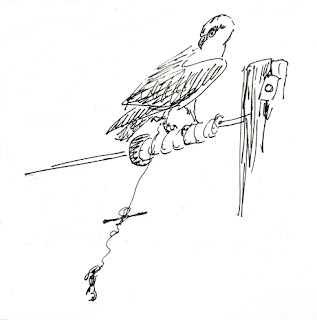 She makes it safely to the nest platform.  Soon the adult male comes in with part of a fish.  They’ll be busy for awhile.

Aug 3:  As we drive down the two miles of blacktop towards the nest I dread what I fear we shall find.  Will she be hung up and dangling form the nest?  If she is still alive, will Pacific Power be willing to come and rescue her? 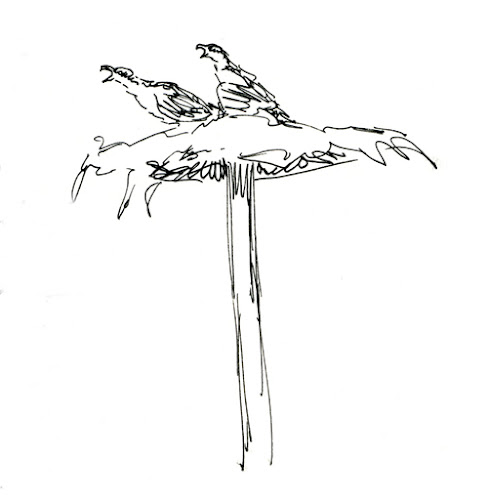 So far so good.  Both youngsters are on the nest.  The young male soon takes off and tries a couple of clumsy landings on a green cotton wood tree and then on a snag.  The young female stays on the nest. The tangle of fish line dangles from the edge of the nest, probably still attached to her foot.  We’re hoping she’ll fly too, but instead the male brings in a nice bass.  That’ll keep them busy for quite a while. 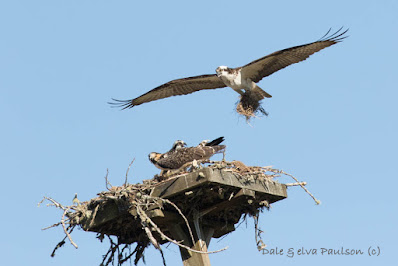 While we wait, twice the adult female flies in with a fist full of dried grasses.  Here the chicks are flying and she still brings in nesting material!  I supposed it helps keep the nest clean.  It must get to be a mess up there.  Sometimes I can see yellowjackets buzzing about, attracted to fish remains.

We stay until it is obvious the chicks and adult female are settling in for the night.  We don’t know if the young female is still tied to that dang tangle of fish line.

Aug 4:  We arrive midmorning.  How is the young female doing?  Both chicks are up there and while we watch the male comes in with a small fish.  Big  squabble!  The female chick is an aggressive monster – MINE!  She seems to get the hog’s share of food up there.  It doesn’t take her long to eat the little fish.

Off she goes!  The young female is flying, and without a long tangle of fish line!  My heart sings.  Our photos show she still has line wrapped around her foot and about three inches dangling, but I doubt very much that tid bit will tangle her.  Most important, she appears to use her foot in a normal fashion.  Eventually that bit of line will rot off.

Aug 28: We’ve stopped at the nest several times since we first found the youngsters have started really flying (Aug 2).  Each time we see at least one bird up there for at least part of the time.  Today the young male perched on the nest by himeself and begged for a good half hour.  He finally flew off.  I feel pretty much the same way.   Time to move on.  Part of me wants to spend hours watching to see how long the adults feed their youngsters, but recent watching has been pretty dull.  I think the youngsters are close to independence and I’m ready to move on too. 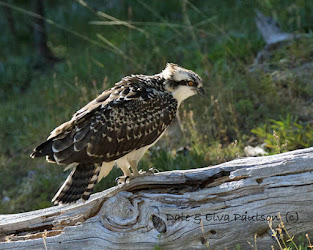 One last note.  We must have brewed good osprey karma during all this osprey watching.  This photo is of a different osprey, but also a young one.  Dale was sitting quietly on a log on the edge of a small pond.  Suddenly this osprey dipped down and landed about 45 feet from him!  … and sat for several minutes.  The osprey seemed concerned about watching the sky.  When it flew, a red-shoulder hawk took off, hot on its heels.  The red-shoulder is a much smaller hawk.  Hardly a threat, but birds often harass each other.  Fun to watch.