Nature Comes to Me 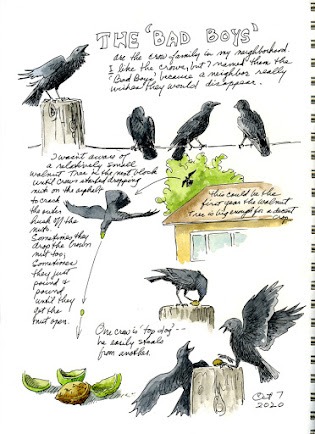 Note:  You don’t need to bust your eyes out trying to read my handwriting on the journal pages.  My text here is a slightly expanded and edited version.

Oct. 7.... I was pretty bummed when I saw the air quality this morning.  We’ve had day after day of light smoke and promises of clean air coming.  So far, when we do get a day of decent (not too smoky air) there always are chores to do in the yard or an appointment.  Usually we are out and about at least three days a week.  We haven’t taken a wildlife photo since Aug 31!

The air was supposed to be good by last Sunday .. Monday ... Tuesday ... now it’s Wednesday and the air quality is getting worse.  I felt a little like a boil ready to pop if I didn’t get out into nature.

But then nature came to me!  We’ve had a family of crows in the neighborhood all spring and summer.  I see them out my front window many mornings.  I’ve nicknamed them the ‘Bad Boys’.  I like the crows, but named them that way because one of my neighbors wishes they would disappear. She has a legitimate beef.  Last year she watched them raid a bird’s nest.

I enjoyed listening to them beg when they were nestlings and now we watch the raucous bunch swoop in and inspect one area after another.  Lately their focus has been on harvesting walnuts. Until this fall, I wasn’t aware of a small walnut tree in the next block.  I looked for it when the crows started dropping nuts on the asphalt and was surprised to find I can see the top of the tree from my couch!

I decided to brave a little smoke and go outside to sketch the Bad Boys.  The crows were most cooperative.  I could see how easily they rip the green nuts off the tree, and how easily the green husk pops off then the nut is dropped.  Once the husk is off, the nut looks like the unshelled nut you and I buy in the grocery store; but now the crow needs to get that hard shell off.  Sometime the crow drops it onto the asphalt again; sometimes he flies to the top of a telephone pole and pounds away.  He may pound for 2-3 minutes before making any progress and another 5 minutes to harvest the yummy nutmeat inside.

I watched one crow wait patiently for another to finish his nut and then the glean was little was left up there.  Another crow just flies in and steals without much of an argument.  He must be ‘top dog.’ 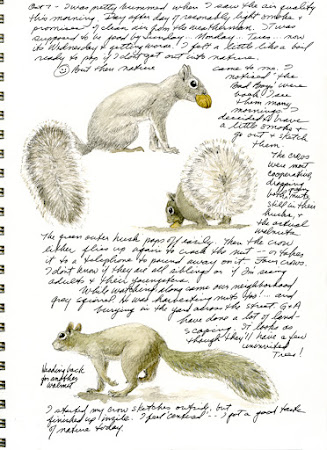 While watching I had another treat in store. Our local grey squirrel was also making trips to the walnut tree, and racing back with one nut at a time. He is a fussy inspector, but eventually picks a spot to bury his nut.  Our neighbors across the street are in the process of extensive landscaping.  I think they are going to have a few walnut trees they didn’t plan on.

I started my crow sketches outside, but finished up inside.  The squirrel was a constent motion machine so we took photos of him for me to sketch from.  After a mix of being outside and finishing sketches inside, I had a good taste of nature.  I felt ‘centered’ again.