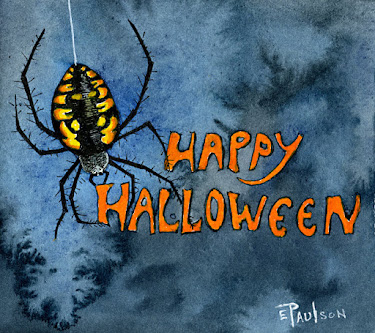 It is Halloween ... a good time to share some spiders with you.  This is a collection of my spider art with comments about the spiders. 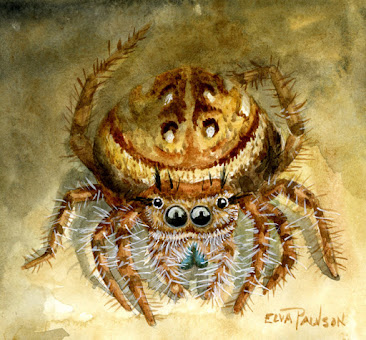 I must confess, I am just a little squeamish about spiders.  If one surprises me, I’m a ditz and may let out a little yelp.  That said, they are fascinating little creatures and I’m even up to inviting my favorites, the jumping spiders, to hop aboard me, for my closer inspection.  Jumpers are so cool – great big ‘head lights, i.e. four eyes facing forward and more tucked back farther.  Their eyes are so shiny, I sometimes see my reflection in them.  That dark spot in the center of the jumper's eyes is my head reflected in her eyes.

The little sweeties stalk their prey.  No fancy orb for them, but rather a bungee cord.  When watching one hunting on huckleberry, he jumped from one leaf to another, but always had a safety line behind him.  Should he miss his next landing, he just dangles, eats his line as he shortens it, and soon is back in a safe place.  Should I disturb one on a telephone several feet off the ground, he may take a flying leap.  Close watching shows he has his bungee cord out and he’ll land somewhere farther down the pole. 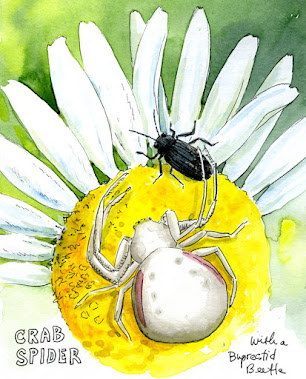 Crab spiders are another spider who don’t need to bother with an orb.  They like to sit quietly and grab with their extra long front legs.  My favorite time for looking for crab spiders is when Shasta daisies are in full bloom.  The spiders often tie half the petals together, thus creating a shady place to quietly wait.  They’ll even nab bumble bees!  This one is looking at a small bupresid beetle. 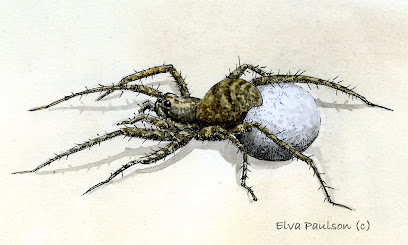 Little black wolf spiders are awfully common around here, but they come in bigger species too.  Many wolf spiders skitter around on the ground and pounce on their prey; others hide in burrows, ready to ambush their prey.  They have a behavior I find fascinating.  The female wraps her eggs in a tidy, silken bundle and carries it with her while her eggs ready for hatching – as seen in my sketch.  Once the babies hatch, she carries them on her back until they are old enough to fend for themselves! 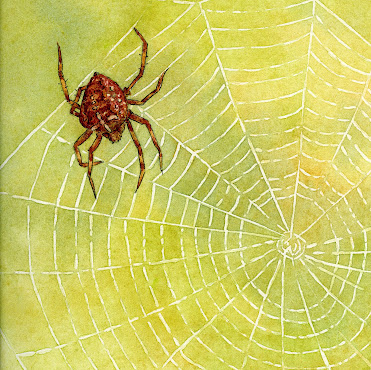 Orb weavers weave the traditional orb, usually a small orb for small spiders and bigger ones as they grow.  One summer I spend an inordinate amount of time watching an orb weaver, a European cross spider, on my deck.  She was so fascinating I wrote a series of four blogs about her life ... and mine (http://elvafieldnotes.blogspot.com/2014/02/henrietta-part-i.htmal).

The 'Halloween spider' at the beginning of this blog, is another orb weaver, a black and yellow Argiope.  They are the biggest spiders I find around here ... and noted for the zig zag webbing in the center line of their orb.  There is a variety of opinions as to why they add the zig zag; does it stabilize the web?  Does it keep birds from flying into the web? 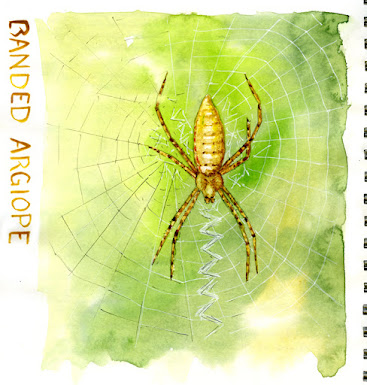 This summer I finally found my first Banded Argiope – same genus as the black and yellow Argiope.  I’ve known for years they are in the area, but it took me forever to find one.  She also had the zig zag in her web.  I’m pretty sure this is a relatively young banded Argiope.  Many of the online photos are much plumper. 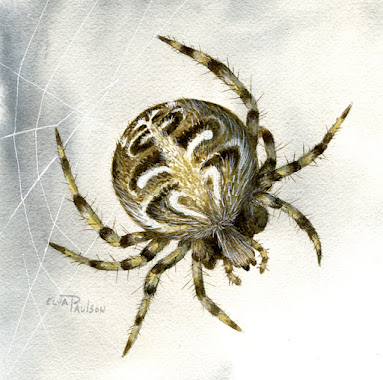 At first I didn’t realize these beautiful spiders are also orb weavers.  I spotted a messy cone with lots of little guy lines.  When I looked for the spider I found her tucked inside the little cone.  Only after I read about Metepeira did I realize she is also an orb weaver.  When I went back I looked carefully and found a delicate orb off to the side.  Just a couple of weeks ago I found another.  This time she was resting on the outside of her cone and it appeared the cone was closed off.  I suspect her egg sac is tucked safely inside.  For more about this little treasure go to this blog of mine: http://elvafieldnotes.blogspot.com/2020/05/space-aliens.html.

My last ‘spider’ isn’t a spider at all, but many of us assume they are.  Spiders are all arachnids and differ from harvestmen because their thorax is separated from their abdomen.  Spiders usually have 3 or 4 pairs of eyes.  If you look carefully at a harvestman, you’ll see their thorax and abdomen are fused into one unit and riding on top is one pair of eyes!  Sometimes we call harvestmen ‘daddy long legs’ because they are so leggy!